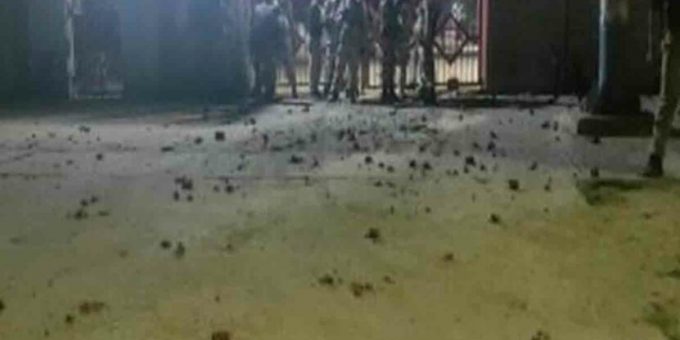 Andhra Pradesh: Atleast 15 people were injured and 20 were arrested after stones were allegedly pelted as clashes broke out between two groups in Holagunda of Kurnool’s Allur in Andhra Pradesh on Saturday.

According to the police, the incident took place during a Hanuman Jayanthi procession. As per the police, stone pelting was witnessed when the religious procession was crossing a mosque while playing songs on the DJ.

“Vishva Hindu Parishad (VHP) organised Hanuma Jayanthi celebrations in Holagunda in Allur, Kurnool. They used the DJ sets against the advice of the police. When they went near the mosque, police asked them to shut the DJ sets. But, they stopped in front of the mosque and started raising slogans. To this, the people from the Muslim community also started counter-slogans,” said Kurnool SP, Ch Sudheer Kumar Reddy.

“The police made the VHP members leave the spot. When the procession moved a little away from the mosque, they started playing the DJ sets again. This led to a small altercation between the two groups. Soon, it turned into a situation of stone-pelting. By then, the police force was brought in and the crowd was dispersed. The stone-pelting took place for almost 10 minutes. Based on the footage that we gathered, 20 members have been taken into custody,” said the police.

“The police force was brought in and the crowd was dispersed. The stone-pelting took place for almost 10 minutes. 15 people sustained minor injuries in the incident. Based on the footage that the police gathered, 20 people have been taken into custody,” said the Kurnool SP.

“Police have been deployed at the site of the incident and the situation is under control. Cases are being registered,” added Kurnool SP Reddy.