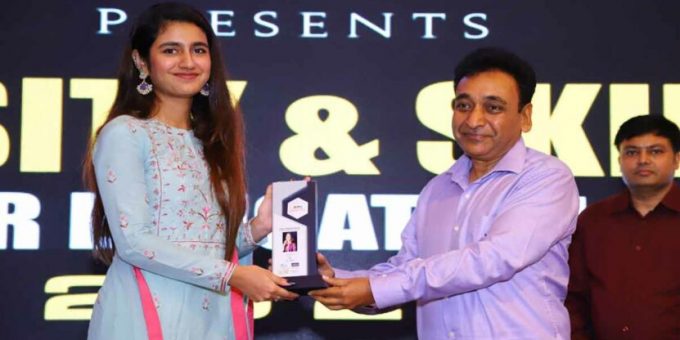 Hyderabad: Actor Priya Prakash Varrier has formally been announced as the brand ambassador for Cyber Crime Awareness Campaign ‘Trapped.Zone’ designed by VOWS and Aap Ki Baat in partnership with Skill India and NSDC during an event on Sunday.

The purpose of the campaign is for alerting the youth against the potential threat from the dark side of the web and sensitising them about personal security.

Priya has recently finished shooting for a movie titled Love Hackers, which deals with the dark web and cyber criminals. Directed by Mayank Srivastava, she will be seen playing a cyber crime victim in the film.

The actor who became an internet sensation with her wink video going viral, says, “I feel honoured to be a part of this campaign as the cause is very personal to me. I have gotten the recognition I have because of the internet and social media. I personally have been a victim of cyber harassment and bullying,” adding that there is a need to be more vigilant in the virtual world and suggests being aware before updating anything on social media and starting a video chat with anyone.

Rajesh Agarwal, Secretary, the Ministry of Skill Development and Entrepreneurship, was the chief guest at the program. University and Skill Expo 2022 was started under the joint aegis of the Federation for World Academics and AapKi Baat, in which many renowned universities and sector skill councils from across the country participated.