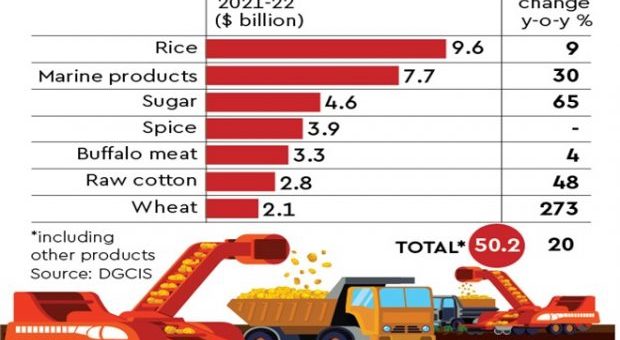 India’s exports of agricultural products, including marine and plantation products, for 2021-22 hit a record at $50 billion. That was up 20% on year.

As per the provisional figures released by DGCIS on Wednesday, the export growth has been achieved mostly because of a surge in shipments of rice, marine products, sugar, buffalo meat, raw cotton and wheat.

“This growth in agricultural products exports has been achieved in spite of unprecedented logistical challenges in the form of high freight rates, container shortages etc,” according to a statement by the ministry of commerce.

It stated that growth in agri-exports will go a long way in realising the Prime Minister’s vision of improving farmers’ income.

“India has captured nearly 50% of the world market for rice,” it stated.

Spices exports touched $4 billion for the second year in a row. The statement noted that despite facing tremendous supply side issues, coffee exports have crossed $1 billion for the first time, which has improved realisations for coffee growers in Karnataka, Kerala and Tamil Nadu.

According to an official statement, the surge in agri exports has been achieved because of sustained efforts on the part of the Department of Commerce and its various export promotion agencies like APEDA, MPEDA and various commodity boards.

“The Department has made special efforts to engage state governments and district administrations in promoting agriculture exports,” it stated.

Initiatives like ‘Happy Banana’ train, an exclusive train with reefer containers to transport bananas from Anantapur, Andhra Pradesh to JNPT, Mumbai have been taken to boost exports from unconventional areas.