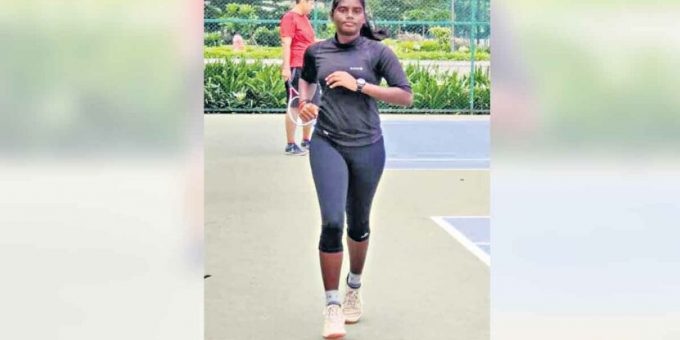 Hyderabad: For 13-year-old tennis player Thaniya Sarai Gogulamanda, it is a dream come true. The talented youngster, braving all odds, has made it to the Indian under-14 girls’ tennis team for the upcoming U-14 ITF World Junior Tennis Championship final qualifying event to be held in New Delhi from April 18 to 23.

Daughter of an autorickshaw driver Samson, Thaniya has been putting in impressive performances in the junior category. With her consistent show, she climbed to India No 3 position in the Under-14 section and made it to the Indian team along with Aishwarya Dayanand Jadhav and Sohini Sanjay Mohanty.

Hailing from Rajahmundry, Samson, saw the spark in a seven-year-old Thaniya. Though he struggled to make ends meet, Samson made sure that his daughter followed her passion. They shifted to Hyderabad, albeit for treatment for his ailing mother, while Thaniya started training at St Thomas School. She then shifted to Sania Mirza Tennis Academy and was offered training free of cost. But Samson could not drive the auto as the academy was on the outskirts. He then shifted his family to Manikonda to address the financial struggle. Thaniya now trains at the Professional Tennis Academy under coach Mohammad Ghouse.

She had represented India in the ITF World Junior Tennis Championship Asia/Oceania final qualifying round matches held in Kazakhstan last year when she was 12 years.

Recalling Thaniya’s determination to do well, Samson said, “After my mother died, Thaniya was shattered. She wanted to play tennis and earn money to adopt the hospital where her grandmother died. She is a determined girl. She also got sponsorship from Rohan Bopanna and his Sports School. But parents were not allowed to stay with their kids. So we opted for education alone rather than coaching,” he said. Thaniya is now a Class VIII student at The Sports School.