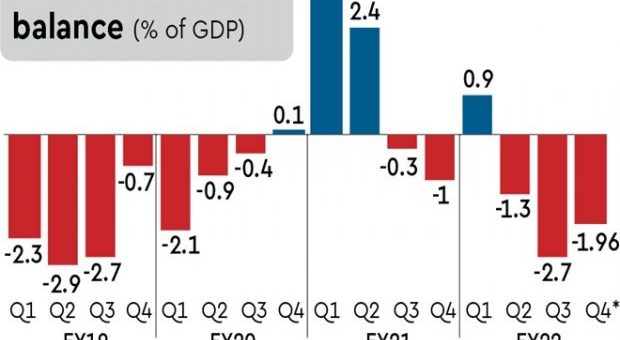 The World Trade Organisation (WTO) has projected merchandise trade volume growth at 3% in 2022, down from its earlier forecast of 4.7%. India’s merchandise exports, which grew by over 42%, would face significant headwinds in FY23 due to the clouds of uncertainty and volatility in the global economy. The WTO pegs the imports volume growth for India’s key exporting partners such as the US (North America) and Europe at 3.9% and 3.7%, respectively, in 2022, lower than 4.5% and 6.8%, respectively, forecasted earlier. On the other hand, India’s merchandise imports are expected to accelerate on the back of escalated commodity prices and higher rupee depreciation in FY23.

This is due to the normalisation of domestic economic activities, steep levels of commodity prices (volatile crude oil prices — Brent crude averaged $113.11/barrel in May 2022; April 2022: $104.89/barrel, March 2022: $117.25/barrel) and inflated freight and transportation costs.