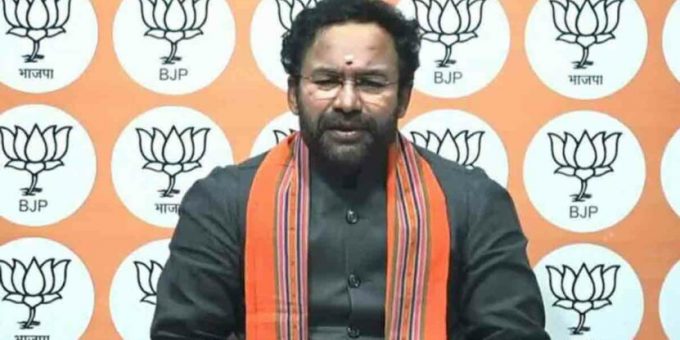 Hyderabad: The Bharatiya Janata Party has changed its tune again in respect of Paddy procurement this yasangi season. The BJP leaders had repeated egged on the farmers to go for paddy plantation assuring that the Centre would buy every grain of paddy from the farmers. The union Minister for Tourism G Kishan Reddy too made repeated assertions on this issue along with his state party president Bandi Sanjay. But now Reddy changed the tune.

In a press conference at the BJP office here on Saturday, Kishan Reddy maintained that Centre would only procure raw rice. “We are ready to buy raw rice till the last grain as per the agreement reached with the State Government”, he asserted. Incidentally, last week the TRS working president and minister K T Rama Rao displayed the video of Kishan Reddy and Sanjay claiming that Centre would buy every grain of paddy from farmers.

Kishan Reddy did not stop at that. He had earlier claimed that he would get the Global Centre for Traditional Medicine established in Telangana. The Centre was, however, taken to Gujarat. And now Reddy now maintained that the “United Nations” took the decision to establish the Centre in Gujarat as an Ayurvedic University was already located in Gujarat. Till recently, he had been accusing Telangana government of delaying sanctioning of necessary land.

He attempted to blame the State government once again and accused it for failing to allocate land for Science City or Kumuram Bheem Museum, despite repeated communications. He claimed that the Centre proposed seven textile parks in the country and wondered whether the State has responded to the same. But against it was Industries Minister KT Rama Rao wrote letters to union Ministers Nirmala Sitharaman and Piyush Goyal in January this year, seeking support of Rs 897 crore to Kakatiya Mega Textile Park in Warangal.

The union Minister blamed the TRS for the mudslinging and personal abusive remarks in the State politics. “This has increased only after TRS lost in Huzurabad as the party leadership has been feeling insecure,” he added. The union Minister said that the alleged humiliating treatment to Governor Tamilisai Soundararajan by the State government was unacceptable. He said persons may change but the system will be there and it should be honoured. When asked for his response to Minister KT Rama Rao’s challenge to him as well as BJP State president Bandi Sanjay that he would resign to his post if the BJP leaders prove that the Centre spent over Rs 3 lakh crore for development of Telangana, Kishan Reddy maintained that “he need not react to such challenges.”