Hyderabad: With the rains here, the threat of seasonal diseases are more than ever. And that is on top of a steadily rising number of Covid-19 cases. To contain the spread of vector-borne diseases in the city, a series of measures are already underway with the Greater Hyderabad Municipal Corporation (GHMC) deploying 2,375 staffers to work on vector control operations.

Presently, weekly anti-larval operations are being taken up with 642 teams as per the Pin Point Programme (PPP). As a part of this programme, residential localities are being inspected and places inside houses identified as mosquito breeding points are being treated with larvicides. In houses where dengue and malaria cases were reported, Pyrethrum was sprayed indoors and fogging was done to prevent further transmission. 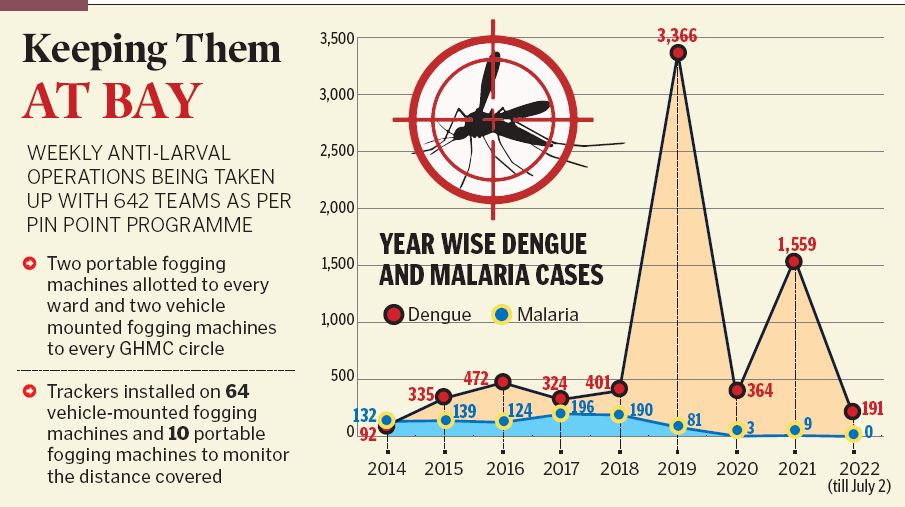 After the corporation was unable to uniformly spray chemical in lakes to destroy mosquito larvae by deploying staff, drones were pressed into service to spray the chemicals. In addition to this, six mosquito trap machines have been installed for identification of mosquito density and species. Based on the data related to mosquito density and species, anti-larval operations, measures to control adult mosquitoes, information, education and communication (IEC) campaigns and other activities are planned. GHMC requested people to keep the premises of houses clean and support the civic body in containing seasonal diseases.