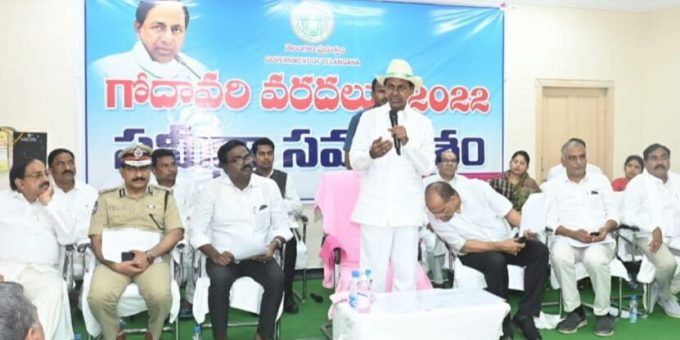 Hyderabad: Chief Minister K Chandrashekhar Rao announced allocation of Rs 1,000 crore to take up works for protection of Bhadrachalam town from Godavari floods on a permanent basis. The government will take up construction of residential colonies for people living in flood-prone areas, develop embankment around Sri Sitaramachandra Swamy temple and also take up repair works of embankment towards Burgampadu.

He had also announced financial assistance of Rs 10,000 and 20 kg rice for the flood-affected families in Bhadrachalam.

Chandrashekhar Rao who is inspecting the flood-hit areas in and around Bhadrachalam on Sunday, told mediapersons that measures will be initiated to protect Bhadrachalam town from flooding permanently. Accordingly, the district officials were instructed to identify necessary land at a higher altitude to construct new residential colonies for the flood-victims. People living in areas along the embankments and are prone to floods, will be shifted to the newly build residential colonies.

The Chief Minister also announced that measures will be taken to protect Sri Sita Ramachandra Swamy temple at Bhadrachalam on a permanet basis. He assured to visit the temple town once again after the flood recedes and normalcy is restored to review and take up development works including protection measures for Sitarama Parnashala from flooding on the banks of Godavari River.

Earlier he offered ”Shanti Puja” to Godavari on the bridge across the river and inspected Godavari karakatta. Later he visited a rehabilitation centre in Bhadrachalam town and interacted with people evacuated from flood affected areas.