“Our aim and efforts are to ensure no victim is struck by stigma and steps back from lodging a complaint against the perpetrator. Multiple modes of lodging a complaint, particularly online mode with the advent of WhatsApp has made the process of complaining much easier for the already tense and scared victim,” a senior official said.

Of the complaints, 50 pertained to harassment via phone, 25 were regarding blackmailing, 16 were about stalking, 15 were about cheating on the promise of marriage, 13 were on social media platforms, 12 were for threatening and 10 were for passing lewd comments. Eight of the complaints were about sending obscene content on WhatsApp while two each were for misbehaving, workplace harassment, flashing and love issue. 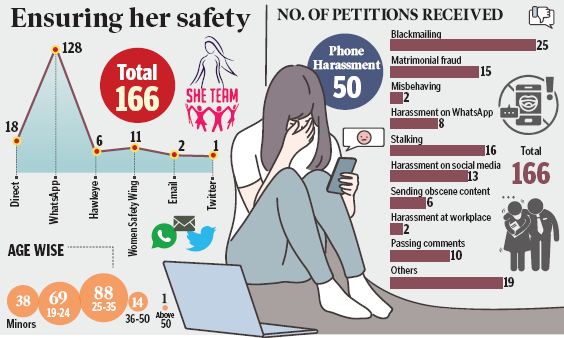 The 11 She Teams in Cyberabad, responded by approaching the complainants at their place of contact to receive a complaint. Officials said based on the verification of facts in the complaints, 33 cases were booked, including 13 FIRs and 20 petty cases. As many as 130 persons were counseled and 62 were warned to change their behaviour.

During the same period, the teams conducted decoy operations and caught 44 persons on the spot and booked petty cases apart from stopping three child marriages.

The Cyberabad police requested women facing any kind of harassment to approach the She Teams by sending a message to WhatsApp No.9490617444 or directly call the divisional She Team or Dial 100 or send an e-mail to [email protected] or Twitter (@sheteamcybd), Facebook (Women and ChildrenSafetyWing) and Instagram (womenandchildrensafetywingcybd).