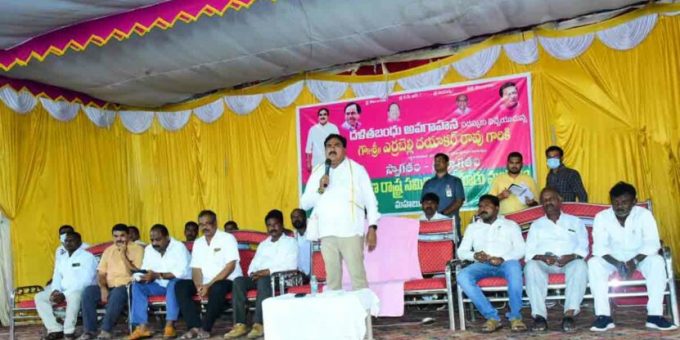 Warangal/Mahabubabad: Panchayat Raj and Rural Development Minister Errabelli Dayakar Rao laid foundation for the construction of 65 double bedroom houses at the SC colony of the Okal village in Warangal district on Friday. Speaking on the occasion, Rao has promised that the houses would be completed at the earliest and handed over to the beneficiaries.

“We are constructing 2 BHK houses in almost every village of the Palakurthy constituency,” he said, and regretted that they could not construct the house at a few villages due to non-availability of suitable land. “Chief Minister K Chandrashekar Rao introduced this scheme to improve the self-respect of the poor. The government is trying to provide 2BHK houses to all the eligible poor people,” he added. Local people’s representatives, officials and villagers in large numbers attended the programme.

Later, the Minister participated in an awareness programme on the prestigious Dalit Bandhu scheme at Thorrur in Mahabubabad district. Speaking on the occasion, he urged the beneficiaries of the schemes to utilise the scheme properly and achieve economic empowerment. “Through Dalit Bandhu scheme a total of 17 lakh Dalits will be provided financial assistance of Rs 10 lakhs each in the next three to four years.

As a part of it, Rs 20,000 crore will be earmarked for this ambitious scheme in the next state budget,” he said, adding that this kind of scheme is not being implemented anywhere in the country except Telangana. Leaders of Kodakandla and Thorrur mandals of Palakurthy Assembly segment attended the programme.