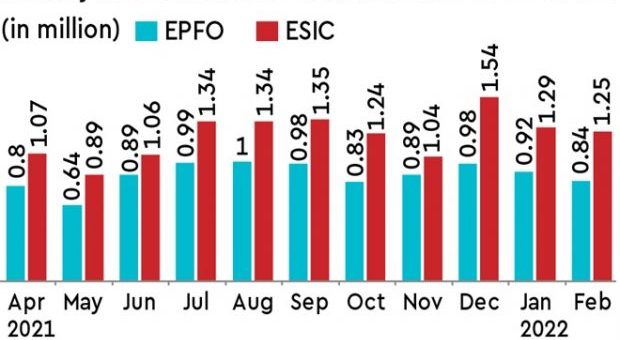 The pace of formalisation of jobs slowed in February, revealed the latest payroll data compiled by the ministry of statistics and programme implementation (MosPI).

At a four-month low, 0.84 million new subscribers joined the social security schemes run by the Employees’ Provident Fund Organisation in February. The number of newly-registered employees who start paying contribution during the month fell to a three-month low for Employees’ State Insurance Corporation (ESIC) at 1.25 million.

The February numbers do somewhat corroborate with the Centre for Monitoring Indian Economy’s (CMIE’s) unemployment data. According to the private sector thinktank, India’s unemployment rate was a six-month high of 8.1% in February.

Since April 2018, MosPI has been bringing out the employment-related statistics in the formal sector covering the period September 2017 onwards, using information on the number of subscribers who have subscribed under major schemes, including EPFO and ESIC. While EPFO is applicable to establishments having more than 20 workers, ESIC applies to entities having 10 or more people.