The process of formulating one-nation-one-tax started long ago but reached its logical conclusion by bringing the entire country under a unified indirect taxation system and, at the stroke of midnight of June 30/July 1st, GST, the biggest and landmark indirect tax reform in Independent India, became a reality.

Prime Minister Narendra Modi had rightly said: “It is a win for the democratic ethos of India and victory for everyone.”

It is true as it demonstrated how federal constituents of the Indian union pooled their sovereignty for this new tax regime.

Former Finance Minister Arun Jaitley said: “GST Council is India’s first federal institution where the sovereignty of the Centre and States pooled together in a federal institution.” And, added, “it is a federal contract.” He also said, while moving the GST legislation: “It is not the end, but start of the journey.“

It is not a ‘contract’; rather, it is the mandate given by the States to the union government under Section 18 of the Constitution (One Hundred and First) Act, 2016. And, it is also incumbent upon the union government to make good for States if there is any loss of revenue due to the implementation of the GST regime.

Though it is in black and white that compensation would be paid for five years ie, till June 2022, the journey of 5 years in the world’s largest tax reform is too short. So, the underlying philosophy is that the government of India would continue to compensate States if their revenue falls short of the threshold limit.

Recently, the Supreme Court ruled that the recommendations of the GST Council are only persuasive and not binding on States or Union. This has created ripples and Finance Ministers of some States have also made some remarks, including revisiting the GST mechanism as a whole. But, the fact is that the GST Council consists of representatives from all States and the Union. Decisions taken by the Council, which has met 46 times so far, are unanimous – hope it continues to do so – indicating a high level of fiscal maturity and understanding between federal constituents and the Union.

The Supreme Court also said that federalism in India is a dialogue in which the States and Centre constantly engage in conversations and, although the Constitution confers the union with a higher share of power in certain situations to provide security and stability in the country, the States still can resist this mandate by using different forms of political contestations.

The crux is that the States have a higher vote share of two-thirds in the GST Council (Article 279A) to resist and reverse if any proposal is pushed by the Union. So, as long as the ‘consensus-based’ approach is followed and not being replaced with ‘majoritarianism’ or ‘authoritarian’ or ‘Machiavellian’ approach by the union in the GST Council, it is welcome.

When the GST was envisaged in 2017, the States thought that the new tax regime would benefit them. The GST (Compensation) Act, 2017, says that the States would be compensated bi-monthly for any loss of revenue if the annual growth in GST collections falls short of 14%. The 2015-16 fiscal was taken as the base year. It went on well, albeit, with some hiccups, till the pandemic devastated the financial position and revenues of the States and the Union.

One should admit that the union government was forced to borrow money and compensate the States, not of its own volition but after the States made a hue-and-cry about the huge revenue shortfall and the impending fear of financial bankruptcy. Otherwise, the Finance Minister made it clear, during the first lockdown, at the peak of the first Covid-19 wave that it will not make up for the shortfall by describing the pandemic as an ‘act of God.’ Even though the pandemic cooled down to some extent, looking at the present scenario, the situation appears to be grim in this fiscal as well, and the finances of the States are still fragile as never before.

It may be true that the April 2022 GST collections recorded Rs 1.68 lakh crore. But, one should understand that higher collections are due to high petroleum prices resulting in increased cost of inputs, supply chain disruptions due to the Russia-Ukraine war and other factors. The Finance Minister says that high inflation is due to the Russia-Ukraine war. But, one should know that high inflation was noticed well before the Ukraine war and it only added fuel to the fire. So, this figure for one month cannot be taken as a yardstick for future GST collections.

Secondly, the Finance Minister is on record saying in March this year that many States, including those ruled by the BJP, during pre-Budget consultations and subsequently, have been demanding for extension of the compensation mechanism. No doubt that there is a need to amend the law for this purpose. It is not a big deal. But, the issue is that States are apprehensive that the union government or the Finance Minister, being the Chairperson of the GST Council, may railroad or bulldoze the GST Council and prevent it from recommending the extension of the compensation period.

Thirdly, the extension sought virtually by every State is justified in view of the pandemic and plummeting revenues, since the GST is the only source of revenue for them. Also, revenue uncertainty puts brakes on capital investment, welfare schemes and impacts the lives and livelihoods of people since the States have no means to cushion this uncertainty. If the Central government does not extend the compensation period, the revenues of States may face a fiscal abyss and they will be forced to levy cesses, etc on items which fall outside the purview of the GST, like imposition of Covid Cess by Jharkhand and Kerala.

So, there is every justification in the demand of States for extending the GST compensation period for five more years and the method of pooling resources can be the same that we have at present.

Simultaneously, the States can also give a thought that compensation beyond June 2022 be paid to them till they achieve the threshold limit of 14% revenue for two years ie, the moment any State gets more than 14% revenue in two consecutive years, the GST Council may stop compensating that State. This would strengthen Centre-State fiscal relations and help in consolidating collaborative and cooperative federalism. 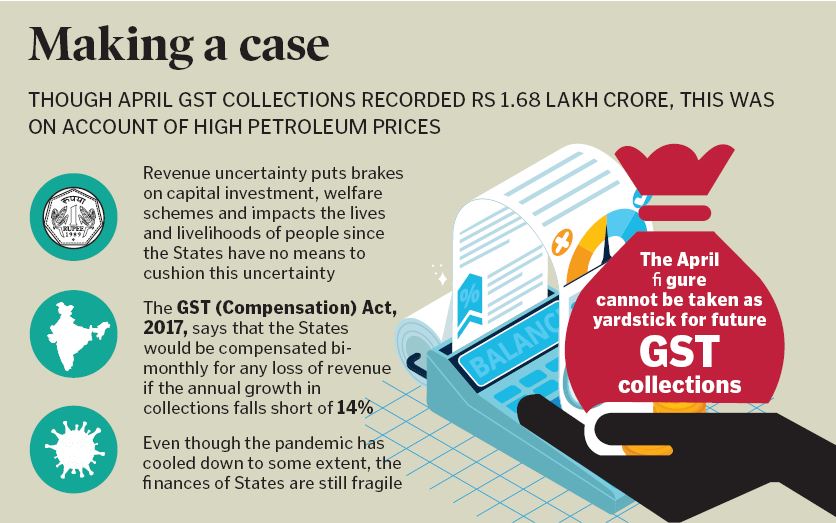 (The author is Member of Lok Sabha (Chevella), Telangana. Views are personal)