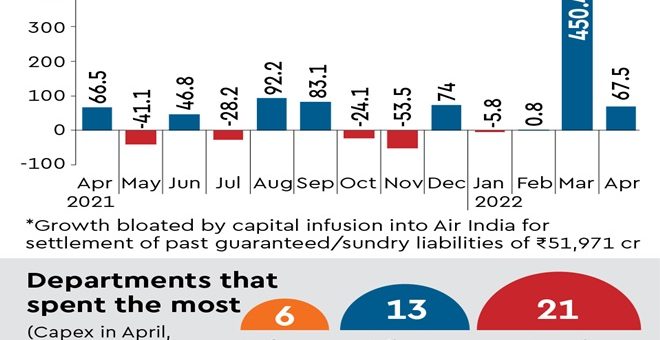 Even as the government is planning to put a leash on “wasteful” revenue spending to rein in fiscal deficit, it has decided against trimming the record budgetary capital expenditure target for FY23, betting big on its high multiplier effect to spur growth. The finance ministry has asked various infrastructure ministries to ensure they realise their capex goals and create durable assets.

The Centre has budgeted a capex of Rs 7.50 trillion for FY23, up 27% from the actual spending of Rs 5.93 trillion in FY22. Its capex fell short of the revised estimate for FY22 by almost Rs 10,000 crore, as some of the departments had failed to meet the targets, despite constant nudging by the finance ministry to spend. Of course, about Rs 1 trillion of the current fiscal’s target will be spent by states, as they have been provided loan support to boost their asset creation.

“We have been very clear that there is not going to be any cut in allocation for capex this fiscal. We have conveyed it to key departments very clearly. They have to follow up on their projects regularly. From the finance ministry side, the minister (Nirmala Sitharaman) herself has been regularly monitoring the capex performance of various departments,” a senior finance ministry official told FE.

Several analysts have stressed the need for sustained growth in the Centre’s capital expenditure, especially when private capex is yet to see a broad-based resurgence, and there are significant downside risks to growth from elevated oil prices, supply-chain disruptions due to the Ukraine war and a rising interest rate scenario. Moreover, a Crisil report released on Wednesday warned uncertainty due to the Russia-Ukraine conflict “could put some of the private capex plans on the back burner”.

The Centre’s capex drive for FY23 has started on a promising note. It jumped 67.5% in April from a year before, on the back of robust spending by the ministries of road transport and railways and the department of defence services (See chart). Revenue spending, however, grew by just 9% in April. While the government witnessed a rare revenue surplus of Rs 590 crore in April amid a healthy 33% expansion in revenue receipts and a modest 9% rise in revenue expenditure, its fiscal deficit for the month was pegged at almost the similar level as the last year, thanks to the spurt in capex.

However, there are growing risks of fiscal deficit overshooting the FY23 target, mainly due to the additional spending on food, fertiliser and LPG subsides, the lower-than-budgeted surplus transfer by the RBI, and the expected revenue loss from the excise duty cut on fuels. “However, a large part of this would be offset by appreciably higher-than-budgeted tax revenue, limiting the extent of the overshooting in the Centre’s fiscal deficit to Rs 1 trillion over the Budget estimate for the current fiscal, even if there are no expenditure savings,” said Aditi Nayar, chief economist at ICRA.

This means, with the compression of revenue spending in certain areas, the government can still manage to meet its capex target without substantially diluting its FY23 fiscal deficit target of 6.4% of GDP (a higher-than-budgeted nominal GDP will help, too), against 6.7% in FY22. However, any further jump in Brent crude oil prices can potentially upset the calculations.

Brent crude futures for August ended at $115.60 a barrel on Tuesday, although some analysts have warned the prices could test the $130-mark following the EU’s plan to shun 90% of Russian oil by the end of this year.