Hyderabad: When the whole nation is immersed in the 75th Independence Day celebrations, the Indian football fraternity was in rude shock on August 15. The news of FIFA banning the All India Football Federation (AIFF) citing the ‘undue influence from third parties’ sent shock waves across the country.

“India had a great show in the Commonwealth Games and Indian sport got a big boost. But this news is disturbing. It is very unfortunate that such a thing happened. They (FIFA) gave 17 months to conduct the elections. But nothing happened. That is why I feel no politician should enter the sports administration. It messed up everything. It is one of the darkest days of Indian football. FIFA doesn’t allow such things as voting rights to players. They believe in an elected body. When other countries in Asia are conducting the World Cup, we are being banned,” he rued.

GP Palguna, the former Indian international, the Telangana Football Association (TFA) secretary and also a former member of the AIFF Technical Committee, hoped the mess would be cleared soon.

“It is a very tough time. The FIFA and the AFC tried their best to set the order in the AIFF. But the CoA three-member committee gave voting rights to 36 eminent players. FIFA didn’t agree to that. The FIFA delegation came down to India and gave a roadmap. We are scheduled to conduct the women’s under-17 World Cup in the country. So the government is also involved.”

The official said that the Supreme Court’s hearing on Wednesday will give a clear picture. “We are waiting for the SC judgment. If they remove the CoA’s decision to give voting rights to former players and agree on FIFA terms, the international body might lift the ban. We, the members associations, also said in writing that we can accept 25 per cent of players into the federation but giving voting rights is not correct,” he added.

“Now that some States do not have international players, there will be no representation from them if the voting right is given to players. FIFA is a world body and they have a constitution and rules. We need to follow them. FIFA wants only an elected body from the State to run the show but not by any individual or the third party,” he added.

Dhyan Chand awardee and former Indian player Shabbir Ali also hoped that a quick solution will be found for the fiasco. “It (the FIFA ban) is a very bad thing. I hope it will be solved before the World Cup (U-17 World Cup in India). There are also some Indian teams like Gokulam Kerala (Indian Women’s League champions) who went out to play in the AFC Women’s Club Championship. And Mohun Bagan is going to play in the AFC Cup inter-zonal semis. There is no clarity on their future now,” he said.

“We still have time for the U-17 World Cup but they have to act very fast. FIFA will not tolerate any irregularities. Hope the fiasco ends soon and India gets to host the U-17 Women’s World Cup.”

Meanwhile, Arjuna and Dronacharya awardee and former Indian captain Syed Nayeemuddin, said this decision is more than a wakeup call and it is time AIFF set the house in order. “FIFA is always right. They gave so much time for AIFF to set the house in order. The AIFF should be disciplined. The ban will have an impact on all the tournaments now and the players will suffer. The federations should follow FIFA rules,” he said.

“It is very shocking to see India being banned. There were quite a few irregularities in the body. Football is the most popular game in the world. FIFA wants discipline both on and off the field. I hope the decision will help Indian football and the administration will follow rules and make Indian football better,” he revealed. 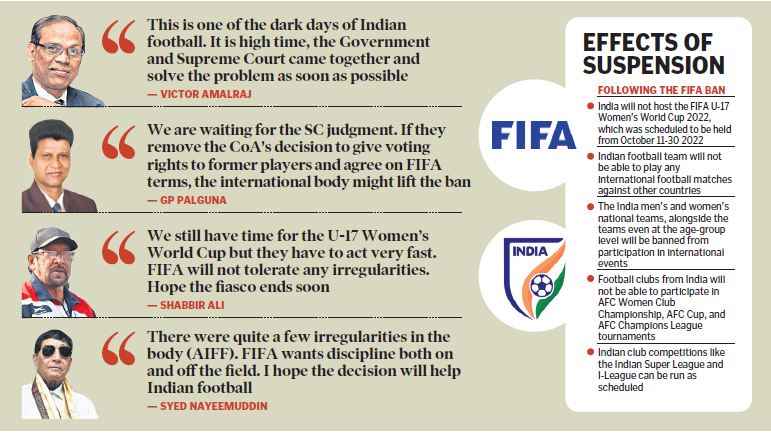