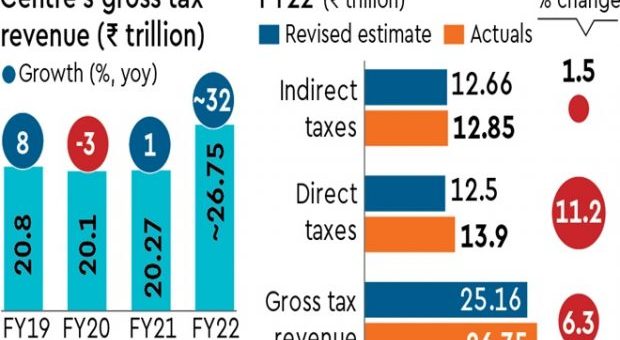 The Centre’s gross tax receipts (GTR) grew by as much as a third on year in 2021-22, the sharpest growth in any year in recent decades if not in recorded history, representing an impressive tax buoyancy of 1.6. Of course, a significant part of this revenue boost can be ascribed to a very favourable base produced by the unusual event of an economic contraction in 2020-21 (see chart), but the rebound, for sure, has much to do with a sharply improved tax compliance.

The tax authorities have put to good use various tools at their disposal, including a repository of information gathered as annual information returns and an effective linkage that has been established between the direct tax and indirect tax wings. The goods and services tax (GST) system has a robust anti-evasion built in via means of its very structure and assimilation of technology.

According to an official source, although the final numbers are still being computed, GTR — receipts before the mandatory transfers to the states from the divisible pool, could well be Rs 26.75 trillion in 2021-22, compared with Rs 20.27 trillion in 2020-21. That would mean the collections would be higher than the Revised Estimate of Rs 25.16 trillion by as much as Rs 1.6 trillion.

The bulk of the additional receipts over RE — Rs 1.4 trillion — would come in as direct taxes. The Centre’s GST receipts (CGST plus a floating segment of integrated GST that goes into the Consolidated Fund of India till it is distributed among the Centre and states and the ‘compensation cess’ receipts) in the last financial year were some Rs 20,000 crore higher than the RE of `6.75 trillion. Excise and Customs receipts were around the RE levels, the source added.

Direct tax receipts (after refunds) in the last fiscal were around Rs 13.9 trillion, Rs 1.4 trillion or 11% more than the RE. Since some revenue numbers are still being consolidated such as tax deducted at source numbers, the final direct tax receipts could be slightly higher, the source said. All the heads of direct taxes — corporation tax, personal income tax and securities transaction tax — exceeded the respective REs.

The higher-than-expected tax revenue in FY22 also makes the relevant budget estimate (BE) for FY23 a gross under-estimate. The direct tax receipts at about Rs 13.9 trillion is at striking distance from the FY23 BE of Rs 14.2 trillion.

On the indirect tax front, Rs 13.37 trillion target of 2022-23 requires annual growth of just 4%. This could be achieved through GST collections. Customs duties and excise duties receipt targets are however a bit challenging due to rate reductions on edible oils, an official said. The cesses on petrol and diesel may have to be pruned during the course of the year if the global oil prices remain elevated for a long period.

The Budget for FY23 assumes nominal GDP growth of 11.1% for the year. Independent estimates say the growth could be a bit higher due to elevated inflation, even though the real GDP expansion might turn out to be less than 8-8.5% forecast by the Economic Survey. That means the buoyancy required to achieve the targetted net tax receipts (BE) will be far lower than 0.9 estimated in the Budget.