Hyderabad: The city that never stops growing is all set to add another 15 major infrastructure projects that will see the constantly developing Hyderabad go another notch higher on the development graph.

This time, the transformation in terms of infrastructure is under the aegis of the Greater Hyderabad Municipal Corporation (GHMC), which is proposing 15 new projects under the Strategic Road Development Plan (SRDP) Phase-2. The corporation has sought administrative sanction of Rs 3,115 crore from the State government for these projects.

The works proposed include the construction of six flyovers, one underpass, four Road under Bridges (RuBs), one Road over Bridge (RoB), a bridge across Fox Sagar surplus nala, a Y Junction and a tunnel at Khajaguda. The Khajaguda tunnel itself requires an administrative sanction of Rs 1,080 crore. 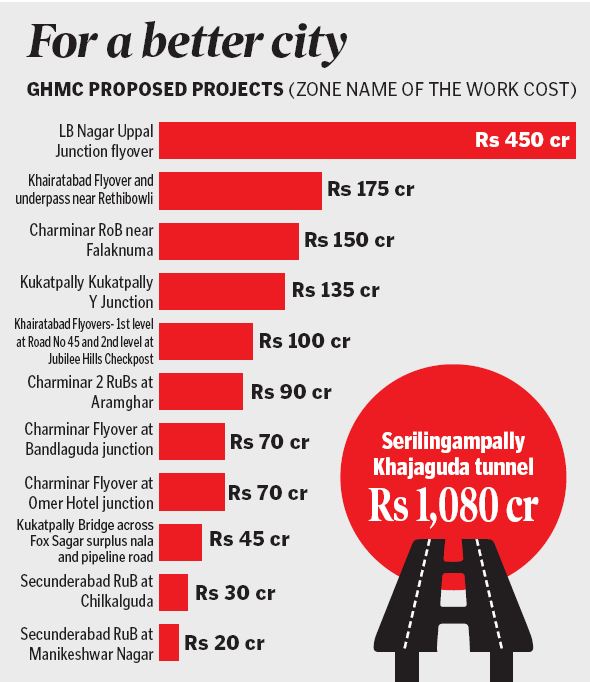 “To execute these 15 projects, the GHMC will not avail loans. We have sought financial assistance from the State government,” a GHMC official said, adding that in SRDP Phase-2, five projects were proposed in the Charminar Zone, four in the Khairatabad Zone, two in the Secunderabad Zone, two in the Kukatpally Zone and one each in the LB Nagar and Serilingampally Zones.

According to GHMC officials, the benefits of the projects include conflict-free traffic movement in many busy corridors across different parts of the city and reduced commute time. In addition to these, another tunnel has been proposed at KBR Park. A feasibility study by technical consultants will be done as part of this proposed project.

“Whether the tunnel will be built or not depends on the feasibility study report. A series of factors including safety measures, ventilation, illumination, etc., will be taken into consideration before the project gets a nod,” a GHMC official said.