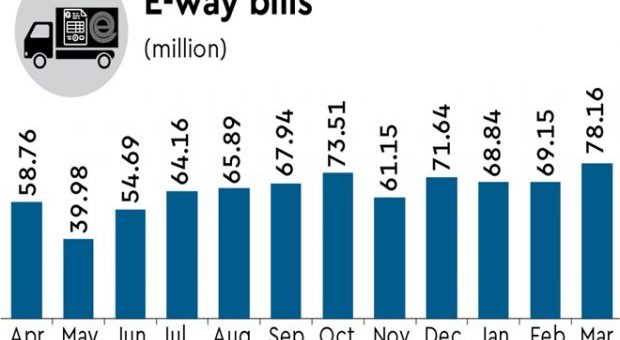 With the e-way bills generated for inter-state trade in goods under the goods and services tax (GST) regime touching a record in March, the monthly GST collections will likely hit an all-time high of around Rs 1.5 trillion in April (March transactions).

E-way bills came in at 78.16 million for March, the highest monthly data since the online system was rolled out on April 1, 2018, reflecting an uptick in demand and shipments before the year-end closure by companies for accounting purposes.

GST collections hit an all-time high of Rs 1.42 trillion in March (February transactions), indicating robustness in consumption, efficient plugging of tax evasion and a sustained shift of business to the formal sector of the economy.

With the E-way bills rising 13% on month in March, the GST collections will see a substantial jump despite a likely increase in GST refunds.
“Companies cleared out more stocks due to year-end push, which increased dispatches and utilization of loading capacity of each truck as well,” All India Transporters Welfare Association (AITWA) joint secretary Abhishek Gupta told FE.

Almost 99% of e-way bills are generated under the road category, Gupta said.

Continued buoyancy in GST collections for several months in a row would help allay the state governments’ concerns about a revenue shock they might have to deal with once five-year revenue protection ends on June 30.

For the Centre, the high mop-up would mean its share of the tax as Central GST would be higher than the revised estimate of Rs 5.7 trillion for FY22 by Rs 20,000 crore or thereabouts.

Given that an incipient pick-up in consumption has resulted in a more-than-proportionate jump in GST revenues, a stronger economic recovery could allow the collections to settle at an elevated level, proving the high revenue productivity of the broad-based consumption tax.