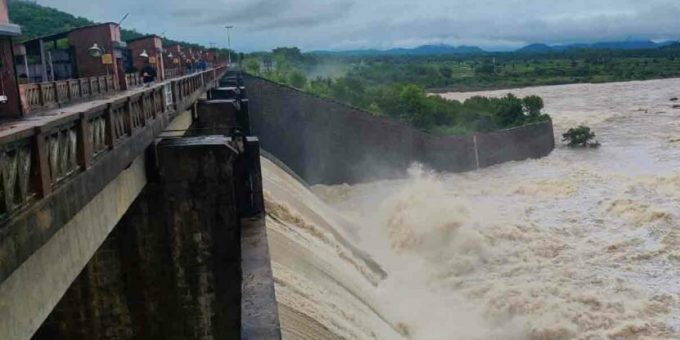 Hyderabad: With the India Meteorological Department (IMD) issuing a red alert on Friday forecasting heavy to very heavy rainfall on August 8 and 9, the Irrigation department officials are on high alert to constantly monitor the water levels in reservoirs that were filled to the brim due to torrential rains that lashed the State in July.

As per the red alert, the IMD predicted heavy to extremely heavy rainfall at isolated places in erstwhile Adilabad and Nizamabad on August 8 and 9. Karimnagar, Warangal and Khammam districts are likely to get heavy rainfall on August 8, it said.

“There will be no major change for subsequent two days,” the IMD said in the forecast and farmers weather bulletin. The bulletin is valid til 8.30 am on August 12. Light to moderate rain or thundershowers are likely to occur in the city in the next 24 hours.

Following the experience faced during the incessant rains that lashed the State in July, the officials from the Irrigation department are leaving no stone unturned in ensuring safety of the reservoirs by assessing the inflows from the upstream and catchment areas of the water bodies.The department has not only taken up pre-monsoon inspection of the radial crest (RC) gates of reservoirs but also conducted re-inspection of the water bodies that received record inflows in July prompting engineers to open gates to release water downstream.

As much as 38,864 cusecs of water were released from Sriram Sagar Project (SRSP) in Nizamabad by opening nine RC gates till 3 pm on Friday. As per instructions from higher officials, the discharge from SRSP through 14 gates was increased to 74,952 cusecs. The SRSP is getting instant inflows of 65,280 cusecs.

Around 1.48 lakh cusecs of water is discharged from Priyadharshini Jurala Project (PJP) in Mahbubnagar while the inflows were 1.02 lakh cusecs. The Lakshmi barrage in Medigadda in Jayashankar-Bhupalapally is receiving 1.40 lakh cusecs and the same water was released downstream through 85 gates, officials added.