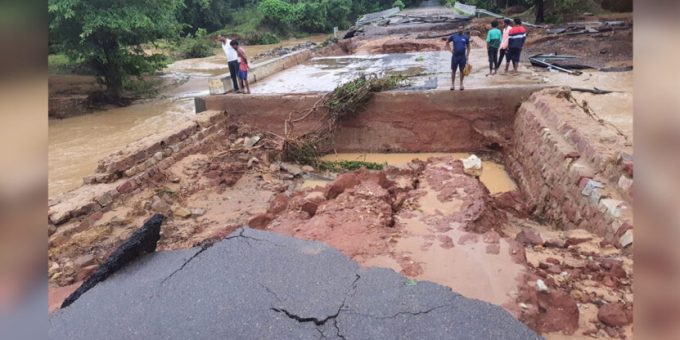 Warangal/Mulugu: With heavy to extremely heavy rainfall lashing the several parts of the district since Friday morning in erstwhile Warangal district, road connectivity has been cut off and normal life has been affected on Saturday.

Roads and cause-ways in Mulugu, Bhupalpally and Mahabubabad districts had been breached at several places. To take stock of the situation, Panchayat Raj and Rural Development Minister Errabelli Dayakar Rao has held a meeting with Jangaon District Collector Ch Shivalingaiah and other officials and asked them to be alert to avoid untoward incidents. He said that the district had recorded an average of 14.29 cm rainfall from Friday to Saturday.

Meanwhile, Dornakal MLA Redya Naik Mahabubabad District Collector K Shashanka, Superintendent of Police Sharat Chandra Pawar and other officials visited the flood affected areas in the district. MLA Redya Naik and other officials have also consoled the victims who were rescued from the stream at Rampuram. As many as 22 labourers were rescued from the stream between Pedda Mupparam and Turpu thanda of Danthalapally mandal by the NDRF personnel. It may be added here that the Danthalapally mandal recorded 22.20 cm rainfall from 8.30 am on Friday to 8 am on Saturday.

The road connectivity between Kesamudram mandal centre and Guduru has been cut off as the streams were overflowing. The national highway (163) between Pasra and Tadwai had been washed away near Janagalancha locality due to heavy rain on Friday. Due to this, the vehicles going to Eturnagaram from Mulugu had been diverted to the Pasra via Medaram route.

Several people were rescued by the locals when a car ventured into the flood waters on the road near Medaram. The TSRTC is running the buses from Hanamkonda to Pasra, and the buses coming from Mangapet, Venkatapuram, Bayyaram and Mangapet were stopped at Eturnagaram considering the road breaches and inundation of the highway at several places.