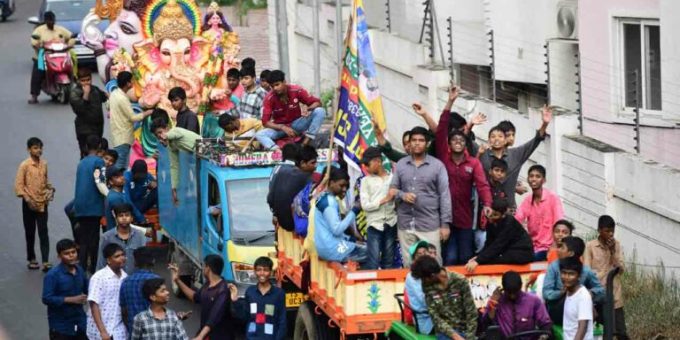 Hyderabad: Farewell to Lord Ganesha is being celebrated on a grand scale in Hyderabad on Friday, with roads to all water bodies, particularly the Hussain Sagar, seeing winding processions and devotees chanting ’Ganpati Bappa Moriya’.

Many people including Ganesh pandal organisers and families dressed in traditional attire are thronging the places where idols are immersed, including at NTR Marg to perform the immersion ritual.

Elaborate arrangements have been made by the State government for the smooth conduct of the festival. Security arrangements were in place, the Greater Hyderabad Municipal Corporation sanitation staff was sweeping the procession route, and at NTR Marg mobile toilets were also installed.

Owners of commercial establishments at Basheerbagh and other places have set up stages in front of their shops and served snacks, buttermilk and water to the processions heading to NTR Marg and Tank Bund for immersion of several thousands of Ganesh idols.