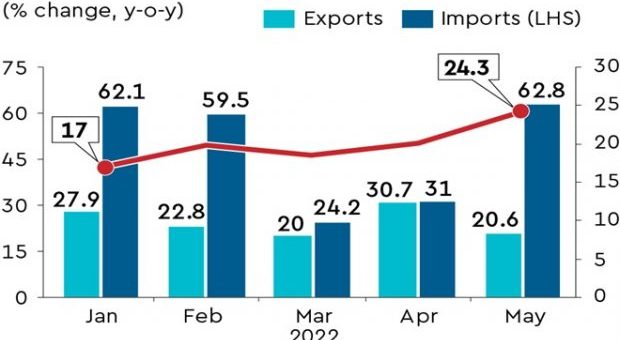 Merchandise exports grew 20.6% in May from a year before even on a high base, but a dramatic 62.8% surge in imports — driven by elevated global commodity prices, especially of oil — pushed up trade deficit to a fresh monthly record of $24.3 billion.

According to the preliminary data released by the commerce ministry on Thursday, exports hit $38.9 billion in May, a record for the second month of any fiscal. However, the growth was slower than the 30.7% recorded in April, when, in absolute terms, the outbound shipment had scaled $40 billion. Barring the effect of an unfavourable base, the growth slowdown also reflects a gradual demand compression in advanced economies that had contributed substantially to India’s post-pandemic export resurgence.

Fresh challenges in the global supply chains, the ban on the export of wheat and curbs on the supplies of iron ore and select steel products, etc, too are going to weigh on the country’s export performance in June.

Imports, however, surged to $63.2 billion in May, against $38.8 billion a year before. While the spike in imports signals improving domestic demand (even non-oil and non-gems & jewellery imports rose by 31.7% in May), it will pressure the current account deficit (CAD), which is estimated by Fitch Ratings to double in FY23 to about 3.1% of GDP. Icra chief economist Aditi Nayar expected the CAD to widen to $26 billion in the June quarter, from $23 billion in the third quarter of FY22 and an expected $16 billion in the March quarter.

Of course, senior government officials have assuaged concerns about financing the CAD.

The import bill was driven substantially by a massive 789% year-on-year jump in gold imports to $6 billion and persistent surge in purchases of crude oil & petroleum products and coal. A spurt in prices of crude oil and coal just served to inflate the import bill of a net commodity importer like India. A Sakthivel, president of apex exporters’ body FIEO, conceded that the imports growth is a matter of concern and “may be looked into”. “However, rising imports of gold may lead to impressive gems & jewellery exports in next 1-2 months,” he added.

Among high-value segments, the rise in exports in May was led by petroleum products (60.9%), followed by electronics (47%) and garments (28%). At $24 billion, core exports (excluding petroleum and gems & jewellery) growth slowed down to 8.6% in May from 19.9% in the previous month.

While orders are still flowing in from certain jurisdictions, the supply-side disruptions in the aftermath of the Russia-Ukraine war have hit domestic exporters’ ability to ship out goods. The surge in international shipping costs has made the matter worse. The World Trade Organization, too, has slashed its 2022 global trade growth forecast to 3% from an earlier projection of 4.7%, which would weigh on the prospects of Indian exports as well.

However, as commerce & industry minister Piyush Goyal said earlier, exporters will likely benefit from the recently-concluded free trade agreement with the UAE and another deal with Australia.

Importantly, merchandise exports hit a record $422 billion in FY22, as Indian exporters cashed in on an industrial resurgence in advanced economies (before the Ukraine war in late February).

FIEO’s Sakthivel said while the government has announced a slew of measures to support exports, “there is also a need to rationalise exports of raw materials to push value-added exports”.