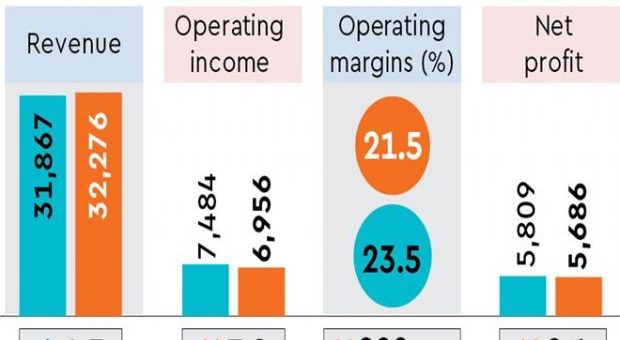 Infosys on Wednesday missed estimates for headline numbers for the March quarter. However, the company offered an encouraging revenue growth guidance of 13-15% in constant currency terms for FY23.

The management clarified the Q4FY22 results had been impacted by a one-off adjustment relating to a top client. Salil Parekh, MD & CEO, said the company was confident of reversing the impact.

The IT major announced the contract value of large deals won during the March quarter at $2.3 billion. Earlier this week, Tata Consultancy Services (TCS) announced order wins of $11.3 billion for Q4FY22 with two deals worth $1-billion plus. Infosys said total large contracts for FY22 were valued at $9.5 billion; TCS had announced deals worth $34.6 billion last year.

Parekh said the demand environment was robust. “Our pipeline in the digital and cloud segments gives us confidence and we’re starting off with a growth guidance of 13-15%,” Parekh said, adding that volumes had been strong in the March quarter.

Parekh observed the net additions of 22,000 employees in Q4FY22 were significant and supported the company’s strong outlook. “We see good momentum,” he said.

The voluntary attrition level for Infosys’ IT services at the end of the March quarter was 27.7% (trailing 12 months) compared with 25.5% at the end of the December 2021 quarter and 10.9% at the end of the March 2021. Nilanjan Roy, chief financial officer, said the company was making investments in talent, adding that 85,000 freshers had been recruited last year. “We’re looking to hire upwards of 50,000 this year,” Roy said. Infosys ended FY22 with a total headcount of 3,14,015.

Analysts said the revenue guidance for FY23 was good and that it suggested the macro environment was benign. However, they were disappointed with the margin outlook at 22-24%.