Karimnagar: Karimnagar commissionerate police have solved the kidnap of a one-and-half-year old girl within four hours using modern technology, restored the abdcuted child to her parents and arrested two persons involved in the kidnap.

Producing the accused before the media here on Tuesday, Commissioner of Police V Satyanarayana said an autorickshaw driver, Senigarapu Santhosh allegeldy kidnapped the girl while she was playing in front of her residence in Ashoknagar at around 7 pm on Monday. As the girl disappeared, parents searched for her and were told by locality people an autorickshaw driver took the girl awat in his vehicle. The girl’s father Mohammed Kudboddin informed police at 9.30 pm. 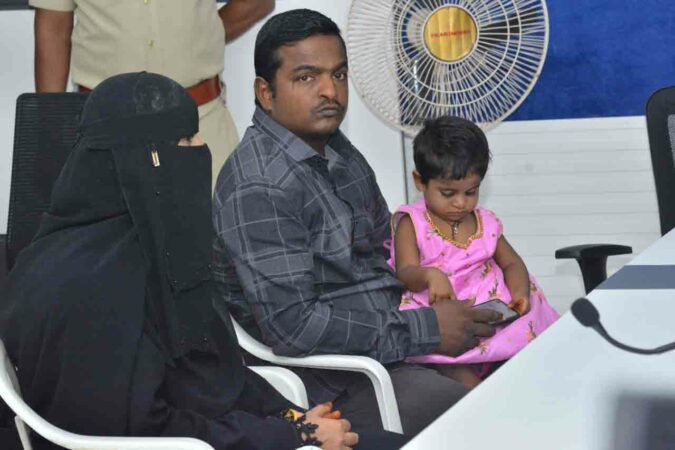 Kidnaped girl handed over to parents.

Police special teams swung into action and launched a search operation. They checked the CCTV footage on different routes and found the vehicle near Mancherial chowk. Later, the vehicle was parked in front of Santhosh’s residence in Subashnagar at around 2 am on Tuesday.

Initially, Santhosh refused to confess the kidnap, but during interrogation, he confessed to the crime and informed that he kept the girl at the residence of his friend Kolamaddi Ramulu in Khazipur. Police teams rushed there and recovered the girl and arrested both Santhosh and Ramulu. The CP appreciated the police officers and constables involved in the investigation and solving the case within four hours.
Santhosh, who works as a driver in Karimnagar Municipal Corporation, works as an autorickshaw driver during his free time.