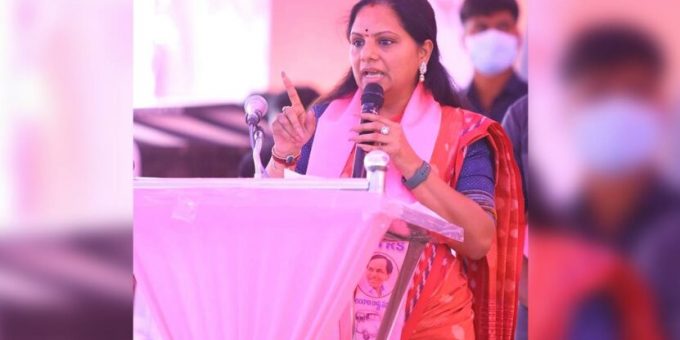 Hyderabad: MLC K Kavitha on Monday questioned the BJP-led NDA government at the Centre as to when will the discrimination towards Telangana end. She demanded to know when will the BJP government release the pending dues amounting to Rs 7,000 crores to the State.

Ahead of the Modi government completing eight years in power at the Centre, MLC Kavitha shot eight questions over its failures during the period. The questionaire titled ‘Aat saal – janta behaal!’ slammed the Centre on the promises that were never kept. “Empowering Nari Shakti by giving them an equal footing. Where is the Women Reservation Bill, Modi ji?” she questioned.

Kavitha pointed out that while the GDP of the country was falling, the one GDP on rise was – Gas-Diesel-Petrol. She wanted to know where has the money from this exponential rise has been invested. With inflation at a record breaking high, she wondered when will the people of the country see ‘Acche Din’ of ‘Mehengai Mukt Bharat’.

With failed law and order, failed systems, the legislator asked when will the non-PR (public relations) and real ‘Amrit Kaal’ be given to the people of India. Farmers are the heartbeat of India, but today the paddy farmers and turmeric farmers of Telangana suffer at the hands of the BJP for seeking minimum acknowledgment of their hard work, he said.

Kavitha said the ‘Rozgaar ki Maar’ which was the reality of the Modi government’s ‘New India’ where crores of Indians were struggling to find an employment that provides them with minimum income support. “Finally, will there be a day when the Prime Minister will truly tell the nation about the truth and the accountability of the PM-Cares funds?” she questioned. She stated that under Modi, the last eight years have been nothing less than a ‘hapless’ and ‘helpless’ India.