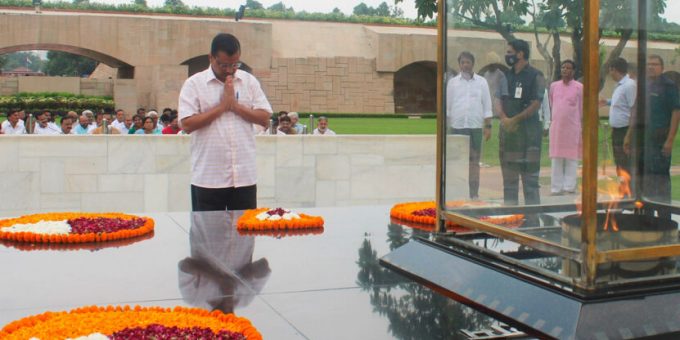 New Delhi: High-voltage drama unfolded on Thursday with Delhi Chief Minister Arvind Kejriwal summoning the AAP MLAs at his residence as he accused the BJP of trying to topple his government by offering Rs 800 crore to 40 of his legislators for switching sides and asked if this money came from GST collections, PM CARES Fund or some of its “friends”.

Kejriwal visited Mahatma Gandhi’s memorial at Rajghat along with party MLAs to pray for the country, asserting that the AAP government is stable as his party legislators are not for sale. AAP chief spokesperson Saurabh Bhardwaj said the BJP’s “Operation Lotus” has failed.

The BJP hit back hard, saying the AAP’s allegations were like a “movie script” and the party was indulging in theatrics. Hours after AAP MLAs visited Rajghat, BJP leaders sprinkled Ganga water to “purify” the memorial as those who offered “Pauwwe par Pauwwa” in Delhi (one plus one scheme under the excise policy) went there to absolve them of their “sin”. MP Manoj Tiwari compared Kejriwal with German Nazi politician Joseph Goebbels for allegedly telling lies repeatedly to divert attention from the “liquor scam” of his government.

Amid all the drama, Kejriwal posted a cryptic tweet later in the evening, saying media is asking for evidence. “There is a serial killer who has committed six murders in similar pattern. He attempted another murder in the same pattern this time. He failed with similar pattern in a murder this time… The victim is saying he attacked him and I saw it. But the entire media is asking for evidence from the victim. There is an eyewitness, the pattern is there, at least arrest him. The police will gather the evidence,” he wrote.

Wading into the issue, Congress leader Alka Lamba termed the Rajghat visit of AAP MLAs as a “high-voltage drama”, questioning why the AAP is not approaching police or ED about the poaching attempts. She assured them of Congress’ support if their claims are true.

The day began with AAP leaders claiming that nearly a dozen party MLAs were incommunicado ahead of the meeting at the Chief Minister’s residence, even as after the head count exercise later they said all the 62 party MLAs were accounted for. Bhardwaj said 53 MLAs were physically present in the meeting while one — Okhla MLA Amanatullah Khan — attended it over phone. Seven MLAs, Deputy Chief Minister Manish Sisodia and Speaker Ram Niwas Goel were out of station and Minister Satyendar Jain is in jail.

“They (BJP) need 40 MLAs to topple my government. They have kept aside Rs 800 crore for toppling the Delhi government. People of the country want to know about the source of this money — is it from GST or the PM CARES Fund? Have some of their friends given them this money?” Kejriwal asked.

Kejriwal, in the same breath, also praised his deputy Sisodia and MLAs saying they will prefer to lose their heads rather than get sold out. “Even mattresses and walls at Sisodia’s residence were searched by the CBI but not even a single unaccounted penny or objectionable documents was found,” he said in reference to recent raid by the central agency at his deputy’s residence in connection with alleged irregularities in the excise policy.