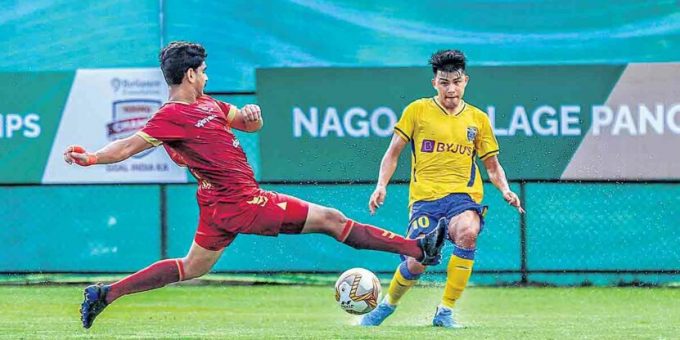 Hyderabad: Hyderabad Football Club began their campaign with a loss to Kerala Blasters in the Reliance Foundation Development League in Goa on Saturday.

It was sweet redemption for Kerala Blasters FC’s reserve team less than a month after their heart-wrenching final defeat to Hyderabad FC in the Indian Super League. Kerala cruised to a comfortable 2-0 victory.

In another game, Jamshedpur FC cantered to a 3-0 win over Mumbai City FC riding Piyush Thakuri’s brace on either side of halftime.

Vincy Barretto helped Kerala take the lead in the 17th minute before Hyderabad’s defender Singson put the ball in his net in the 36th minute. As many as five players who featured prominently for Kerala in the ISL this season started the game with the promising Ayush Adhikari leading the side which boasted of players like Sanjeev Stalin, Givson Singh, Bijoy V besides Barretto in their ranks. Goalkeeper Sachin Suresh, who was also part of the ISL squad under Ivan Vukomanović, started in goal for the ‘home’ team.

Kerala were at it from the get-go, Givson curling a free-kick over the bar inside the first minute from the edge of the box. Hyderabad FC also had the likes of Abdul Rabeeh, Abdul Anjukandan, Amritpal Singh, and keeper Lalbiakhlua Jongte from the title-winning ISL squad, and Rabeeh looked in fine form combining well with C Lalchungnunga.