The State government had sanctioned a budget of Rs 8.5 crore for taking up conservation works at the 17th century mosque located near the historic Charminar. The works of the mosque were initiated in 2017 but after five years, are still continuing. The Minority Welfare Department is overseeing the project.

“The Department of Heritage expressed its inability to undertake the electrification work as they have no experience. Similarly, the Roads & Buildings Department also backed away because it is a heritage monument and only experts in the field can handle the delicate task,” a senior official of the Minority Welfare Department said.

The Minority Welfare Department has now suggested to the Department of Heritage to approach the Aga Khan Developmental Network (AKDN), which has expertise in restoration and conservation of heritage monuments.

“In a few days, officials from the Department of Heritage will be holding talks with officials from AKDN. We hope that will help us speed up the works,” the official said. 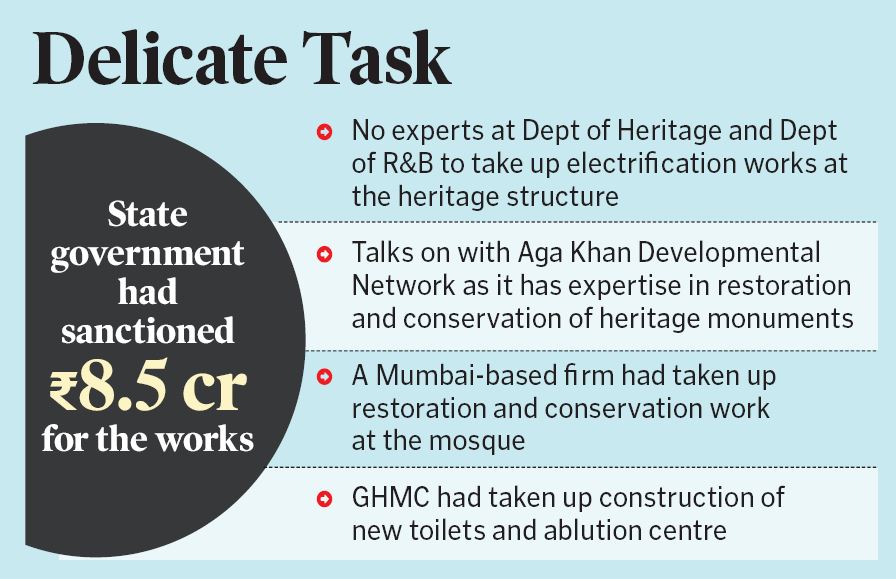 Earlier, a Mumbai-based firm had taken up the restoration and conservation work at the mosque. Except one tomb of the mosque and a few small works on the terrace, the rest of the works were completed by the firm. The restoration of the main door and the gateway were also completed two years ago.

The Greater Hyderabad Municipal Corporation, on its part, had taken up the construction of new toilets and ablution centre and the works were nearly completed by the contractors. Once the works are completed, the Minority Department plans to take up beautification works.

Big earthen pots with flowering plants will be kept at different places in the mosque. Before starting the works the Department of Heritage, along with the firm engaged for conservation of the mosque, studied the monument for around a year and its reaction to various climates before preparing a plan.