Hyderabad: Water bodies in the city and its suburbs, which for decades were subjected to perils of pollution and their existence threatened due to encroachments and unhindered dumping of garbage and construction debris, are now on the path of rejuvenation.

A series of measures in the last few years by the State government, initiated to infuse a fresh lease of life for lakes and ponds, are in fact yielding positive results. Examples of success stories of rejuvenated water bodies, such as Malkam Cheruvu among others, can be seen in the city and surroundings.

And more are on the way to regain their lost pristine nature with the State government having sanctioned Rs 95.54 crore. This amount is to be spent on the rejuvenation of 61 lakes and the Greater Hyderabad Municipal Corporation (GHMC) has already taken up works in a phased manner. In addition to these, 14 more lakes are being rejuvenated by various companies under Corporate Social Responsibility.

In addition to this, as a long-term measure, the sewage that used to be discharged in these lakes is being diverted by taking up required civil works. The measures taken up to rejuvenate the lakes do not end here with the Entomology wing of the GHMC simultaneously taking up cleaning of 39 lakes in the first phase. 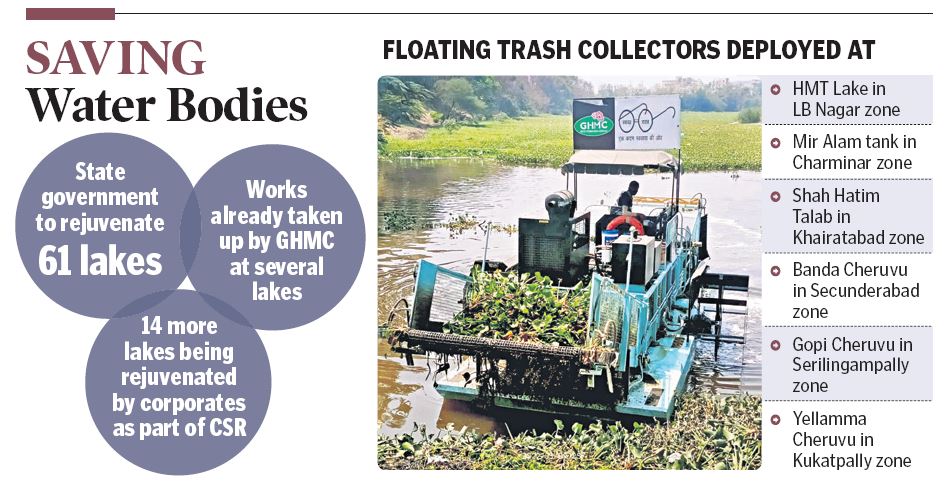 At these water bodies, water hyacinth, debris, and other floating waste material are being fished out using Floating Trash Collectors (FTC). The exercise is already taken up at lakes in different parts of the city including in LB Nagar zone, Charminar zone, Khairatabad zone, and Kukatpally zone.

In addition to this, cleaning of 19 more lakes in different parts of the city will commence soon, said a GHMC official. “To clean these 19 lakes, we are not inviting separate tenders. As the civic body has procured six FTCs, the cleaning will be done using them,” he said.