Hyderabad: All roads in the city and suburbs on Friday led to the water bodies as devotees in large numbers joined the Ganesh idols immersion procession.

The enthusiastic buzz of the immersion of the idols began right from the early hours not only at Hussain Sagar, but also at other lakes and ponds apart from specially created artificial ponds in different parts of the city. Soon, long and winding processions started to form at most of the road junctions as more people joined in and headed for immersion chanting ’Ganpati Bappa Moriya’ and ‘Ganesh Maharaj ki Jai’. 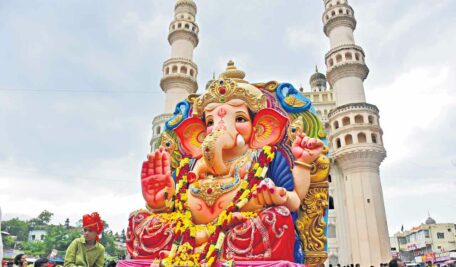 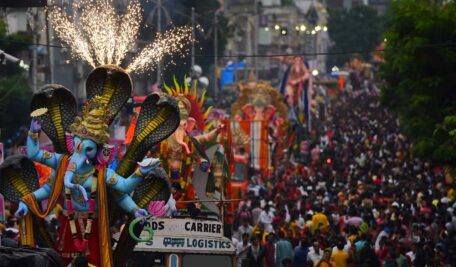 Clad in traditional attires and in a celebratory mood, children and youth were seen dancing to the beats of musical bands as the processions proceeded at a steady pace. Families in large numbers were also seen directly coming to NTR Marg to immerse the idols from their homes at Hussain Sagar lake.

At different points along the procession routes, specially erected dais welcomed the devotees, and flower petals were showered on the idols. Snacks and buttermilk were served by several commercial establishments and also voluntary groups.

As the idols depicting Lord Ganesha in myriad forms passed through, devotees lined up along the roadside and offered prayers amid the playing of devotional songs. An idol made of coins was the cynosure of all eyes while another idol on a platform attached with a trailer kind of arrangement carrying ten small idols in a line attracted the attention of many.

Elaborate arrangements were made by the State government for the smooth conduct of Ganesh idols immersion across the city on Friday.

Apart from security arrangements to ensure a smooth and peaceful procession, 280 cranes were deployed at the immersion points. The GHMC had pressed into service around 10,000 sanitation staff and the HMWS&SB setup counters along the procession route to provide drinking water. At NTR Marg, mobile toilets were also installed.

Around 100 expert swimmers were deployed at immersion sites to tackle emergencies while medical camps were set up. The procession and immersion of idols were monitored by senior officials of various departments including GHMC and the police from the temporary tents raised along the NTR Marg.

Apart from the main water bodies, the Ganesh idol immersion was also held at 74 artificial ponds across the city.

Spells of rains delayed the centralised Ganesh immersion procession by a few hours in old city.

The procession picked pace with the Balapur Ganesh idol starting its journey around 11.30 am after the auction of the laddu, fetched a record Rs. 24.6 lakh. Soon many more idols lined up the road between Chandrayangutta and Charminar started for Hussain Sagar.

However, with rains starting around noon and continuing for around two hours, the procession came to a halt. The organisers of the Balapur Ganesh braving the rains continued with the procession while other idols were stuck at the starting points.

After the rains subsided, the idols started for Hussain Sagar. At 5 pm, several idols commenced their journey from Chandrayangutta, Falaknuma, Uppuguda, Chatrinaka and other areas usually seen as the tail-end areas of the Ganesh idols procession. The idols were passing the Charminar at 10 pm amidst heavy police presence.

In the afternoon, mild tension prevailed at Shahalibanda crossroads when BJP leader A Jitender picked up an argument with the cops for stopping the procession. The police explained that the move was initiated as Friday prayers were going on at Mecca Masjid. The police later pacified Jitender and his supporters.

In the early hours of Friday, mild tension also prevailed at Hussaini Alam when some people alleged stones were pelted on the procession from a house belonging to members of another community. Senior police officials reached the spot and dispersed the gathering. Police are investigating.

In view of Friday prayers, elaborate arrangements were made by the police in older parts of the city. At Mecca Masjid, only a handful of people turned up for the prayers following appeals by community elders who asked the people to attend prayers in the local mosques in their colonies.

This year, the immersion of Khairatabad Ganesh idol was more visually striking as the complete idol was immersed in Hussain Sagar lake.

The Panchamukha Maha Lakshmi Ganapathy idol was made out of clay and was successfully immersed at around 7 pm amid a sea of people who thronged NTR Marg.

Despite rains and immersions being delayed, people choose to stay at NTR Marg and with folded hands bowed down to the deity. The Khairatabad Ganesh was brought in a heavy vehicle equipped with 26 tyres.

The immersion of the clay Ganesh Idol near Ram Nagar bridge was performed at the place where the idol was installed. Water tankers were brought for the immersion purpose of this idol, set up by the Jai Jawan Jai Kisan Association.

The association in a press release said that, in addition to those from Ram Nagar, people from different parts of the city came to the Ganesh pandal to see the immersion ritual.