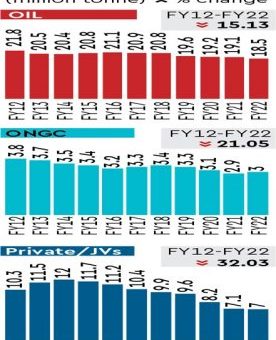 The Russia-Ukraine war has exposed India’s high vulnerability to global oil shocks as a country importing 85% of its crude oil requirement. Despite several policy incentives over the last few years to attract foreign investments in oil exploration and production, domestic output of hydrocarbons has been on the decline over the last decade.

Both in the public and private sectors, the production has fallen, while the country’s oil demand has grown by 55% in the decade to 2019 and is projected to rise by 80% from the current level by 2040.

As the chart shows, annual crude production by ONGC in FY22 was 15% lower than a decade ago while peer CPSE Oil India’s output fell 21%. Combined oil production of private-sector companies and joint venture units declined an even sharper 32% in the decade.

According to International Energy Agency, India’s oil demand has grown from 3.31 million barrels per day (mbpd) in 2010 to 5.15 mbpd in 2019 and dropped to 4.76 mbpd in 2021 due to two years of pandemic. However, with the size of India’s GDP projected to grow to $8 trillion by 2040, the demand for oil is expected to rise to 8.7 mbpd by 2040. Some moderation in demand is expected because of the shift to electric vehicles and the policy support to the sector, as part of the country’s de-carbonisation policy.

Rising oil import Bill is a big budren on India’s fiscal and current account deficits. While the fiscal burden has been mitigated to an extent via the decontrol of auto fuel prices, surging energy imports could potentially be a huge challenge to the managers of the country’s external sector in the coming years.

The efforts of state-run oil firms to take part in oil and gas ventures abroad have produced some results, but these gains are grossly insufficient to alter the dynamics.

The government introduced several policies over the last 50 years to increase domestic crude oil and natural gas production. Replacing the old regime where the state sector enjoyed privileges in award of fields, the production sharing contract (PSC) regime under New Exploration Licensing Policy (NELP) came into force in 1999. Under the NELP, licences for exploration were awarded only through a competitive bidding system and state-run companies were required to compete on an equal footing with Indian and foreign companies to secure licences. Although several rounds of bidding took place under NELP leading to award of a large number of exploration blocks, the policy was not really successful in generating risk capital in the sector, from large foreign companies. The so-called discovered small field policy (DSF), and hydrocarbon exploration and licensing policy (HELP) followed in subsequent years. The HELP launched in 20-16 aimed at reducing India’s hydrocarbon import dependency by 10% by boosting the production of oil & gas in the Indian sedimentary basin. Its salient features included uniform licences, open acreage, and an easy-to-administer revenue sharing model.

Under the HELP scheme,the open acreage licensing policy (OALP) provided for relatively lower royalty rates, marketing and pricing freedom, and freedom to investors to carve out blocks of their interest.

However, of 127 oil and gas blocks awarded since 2018 under OALP none have reached the production stage. Around two years were lost in pandemic, while foreign participation has dried up. The levies on production revenues from the fields are still very high.

Debashish Mishra, partner, Deloitte India, believes there has not been much progress in production in the last decade as licensing stopped for 7-8 years and no new blocks were awarded between 2010 and 2018. Although several blocks have been awarded under OALP and DSF policy, there has been “zero interest” from major foreign players, he notes.

Prachur Sah, deputy CEO of Cairn Energy, recently told FE that the cost of producing crude oil is around $30-$35 per barrel and 70% of the revenue goes as levies to various governments. “It would help if the government reduces the levies to 40%,” Sah had added.

The 21 blocks offered for exploration and production of oil and gas OALP bid round-VI attracted just three bidders at the close of bidding on October 6, 2021. OALP-VII round, bids for which closed in February this year, saw four companies, including three state-owned, put in 10 bids for the eight oil and gas blocks. Six blocks got single bids.

“If the government incentivises existing blocks to increase domestic output, then, even if the cost of production goes up a little, India would benefit as increased domestic production will ultimately help in cutting import costs,” Sah said.

“India never had a prolific geology for oil and gas production. Although many reforms happened in upstream licensing regime since 2014, international players are not too excited about investing in India as energy transition is dawning on the sector” Mishra said.