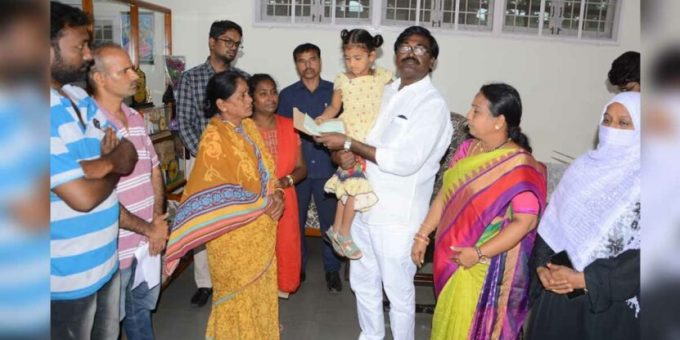 Khammam: Transport Minister Puvvada Ajay Kumar handed over cheques of Rs 5 lakh each to the bereaved families of a worker of Khammam Municipal Corporation (KMC) and two members of its Disaster Relief Force (DRF) towards ex-gratia on behalf of the KMC here on Sunday. A worker Ch Sandeep and DRF members P Venkatesh and B Pradeep, died recently in different accidents.

The Minister expressed his grief over the death of the KMC worker and DRF members. He handed over the cheques to Sandeep’s parents, Venkatesh’s mother Nagalakshmi and Pradeep’s wife Nagalakshmi. Later he interacted with them enquiring about their family conditions.

Venkatesh’s mother Nagalakshmi lamented that the family lost their livelihood due to the death of her younger son. In response, the minister instructed the Municipal Commissioner Adarsh Surabhi to offer an outsourcing job to her eldest son in KMC.

Pradeep’s wife Nagalakshmi grieved that she has a five-year-old daughter and lacks means to look after her. Shaken at her plight the minister ordered the commissioner to make arrangements for the child’s education along with an outsourcing job to the woman.

Ajay Kumar suggested that KMC should take the responsibility of the child till her education was completed. A record has to be prepared in such a manner that whoever be the Municipal Commissioner, the child’s education has to be taken care of.

The Minister consoled the bereaved families. He assured them that the State government would stand by their families and told them to meet him for whatever assistance they might need in future.

Later in the day,Ajay Kumar inaugurated a new building of Primary Agricultural Co-operative Society and a warehouse with a capacity of 300 metric tonnes at Pandithapuram, Kamepalli Mandal of Yellandu constituency in Kothagudem district.
Earlier, the minister unveiled a bronze statue of former ZP Chairman Chekuri Kasaiah at Lakaram tank bund in the city. He also inaugurated two Freedom Parks at Gattaiah Centre and at Burhanpuram in the city.