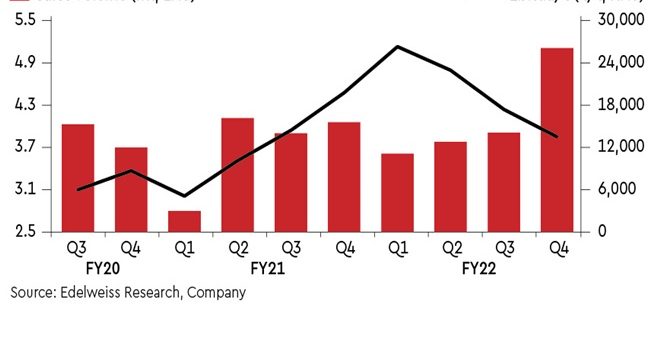 Going ahead, while we expect JSTL to achieve its daunting volume guidance of 22.6mt, high capex intensity is a cause for concern in the current environment of declining steel prices. Maintain ‘Reduce’ with an unchanged TP of Rs 471 valuing the stock at 5.6x Q2FY24E Ebitda.

High capex intensity amid falling spreads a key issue: We are positive on JSTL coming close to its aggressive sales volume guidance of 24mt (India: 23.3mt). However, we believe standalone Ebitda/t might shrink to Rs 11,500–13,000/t, even considering moderating coking coal and iron ore prices through FY25E. This coupled with planned capex of Rs 200 bn in FY23E and Rs 191 bn in FY24E implies debt is likely to remain elevated. While management has indicated that capex might be pruned in case spreads erode materially, we see JSTL more precariously placed than its peers.

Outlook: High capex intensity – While we are optimistic about JSTL ramping up volume, we are concerned about its high capex intensity in times of declining steel prices. This is exacerbated by the overhang created by the recent regulatory blow. We maintain ‘REDUCE/SU’ on JSTL with an unchanged TP of Rs 471/share.