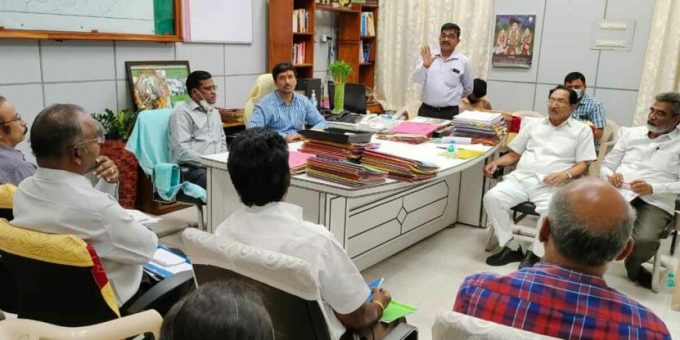 Speaking on the occasion Balram suggested creating a health profile of each employee and to make it available in the hospital management system. He also wanted cancer medicines available at the SCCL Hospitals. The audit report on financial transactions for the financial year 2020-21 was introduced and approved in the meeting where a review on employees pension, CPRMS-NE was also conducted. The GM (IT) was directed to prepare a portal so that the balance on the CPRMS-NE card could be known.

Also, the concerned authorities were directed to inform the former employees of the card balance through SMS. The officers were told to consult with the LIC officials on providing fund manager services as well as insurance and additional benefits for all employees. Trustee members TBGKS president B Venkat Rao, general secretary Raji Reddy, GM (Personal IR & PM) A Anand Rao, GM (Finance) M Subba Rao, Chief Medical Officer (CMO) Dr. BV Rao, GM (IT) Ram Kumar and others were present.

Later in the day GM (Personal Welfare) K Basavaiah conducted a review with personnel department officials of all areas through video conference at the Head Office. He told the personnel officials to include the nomination details of all the officers/employees in the SAP system forthwith. He suggested employees to contact the helpline number: 9491144178 to get their doubts clarified on CPRMS-NE and wanted officials to resolve pending Executive Defined Contributory Pension Scheme (EDCPS) claims.

The files related to dependent employment have to be thoroughly scrutinised at the area level and then sent to the Corporate Office and steps to resolve the pending dependent employment cases before 2018 have to be taken. Steps should be taken to recover the CMPF amount paid to the employees re-inducted after the enhancement of retirement age. Vacant quarters information should be sent to the corporate office regularly and no one should be allowed into the quarters without an allotment, Basavaiah said.