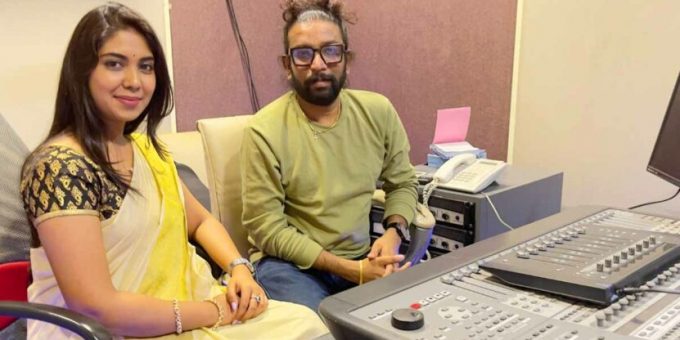 Hyderabad: Stepping into new arenas of the music industry and exploring the versatility of Indian music, Shailey Bidwaikar has released her first Tamil song with music director Maris Vijay. Their upcoming song ‘Kadhal Vithaiyee’ has been released on every major music platform.

In the past, Shailey has left her mark on audiences performing on the small screen. She started off showcasing her talent on an array of reality shows including Voice of India, Chhote Ustaad, and Ustaadon Ke Ustaad. Along with this, she has lent her voice to Hindi, Marathi, Telugu, Nepali and Punjabi songs thus prepping to be an all-rounder in her field. She has worked with renowned names in Bollywood industry including Pritam, Shaan, Keerthi Sagathia and Rohan Rohanto name a few and been a playback singer for movies such as Sanjay Leela Bhansali’s Ramleela and Singh Saab the Great. She has lent her voice under the music direction of Hitesh Modak for 4 songs in the newly released ‘1962 War in the Hills’ on Disney+ Hotstar. It is a multi-starrer web-series based on the 1962 Indo-China war with leading names Abhay Deol, Mahie Gill, and Akash Thosar, directed by Mahesh Manjrekar.

Giving her voice for the first time in a Tamil song, a jolly Shailey thanked Maris Vijay. She said, “I would like to thank Maris Vijay sir for giving me this stellar opportunity to work with Tamil music industry. Working with him has been a great learning opportunity. Not only was I able to learn and sing in a new language, the hospitality that sir has shown me has left me speechless.”

Maris Vijay who has made his stellar remark in Hollywood and Indian film industries said on the occasion of working with Shailey, “Shailey’s voice was perfect for the song as it brings out in true essence the meaning and emotions of the lyrics and music. We will be starting our video production soon and I am glad that Tamil audiences will now be introduced to the versatile talent that is Shailey.”

‘Kaadhal Vithaye’ has been released on every online platform like Spotify, Jio Saavn Music, iTunes, and Amazon Music.