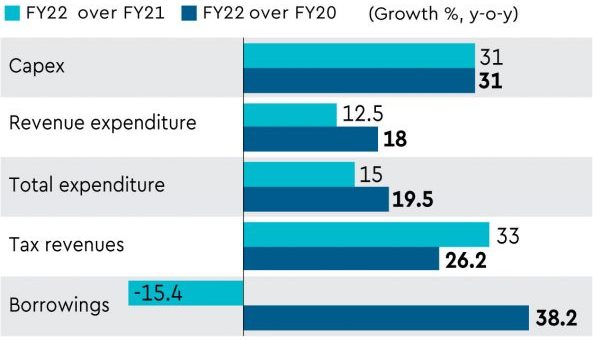 Helped by robust tax revenue receipts, capital expenditure by state governments seems to have jumped by almost a third on year in FY22, a review of the budgetary performance of 20 states by FE showed. The year-on-year surge in productive investments by these states in the last financial year was enough to make up for the flat capex growth in pandemic-hit FY21.

States’ fiscal performance in the last financial year, in fact, mirrored the Centre’s on most key parameters. On both tax revenues and capex, for instance, the annual growth exceeded 30% for both the Centre and states in FY22.

The overall tax receipts of the 20 states — own tax revenue plus divisible-pool receipts from the Centre — jumped 33% on year to Rs 21 trillion in FY22, thanks to a reviving economy, improved compliance and higher transfers from the Centre. The combined tax target of all states in FY22 was Rs 22.85 trillion, which required annual growth of 26%. This means states likely exceeded their combined budget target for tax revenues by a significant margin in FY23.

The surge in tax revenues and a reining in of welfare spending after two years of Covid-related splurge seem to have also enabled state governments to scale up their capital expenditure in FY22. Yet, they may miss the ambitious capex target, as meeting it would have required a 44% annual growth.

Aware that capex by states would pick up towards the end of a financial year, the Centre had front-loaded tax devolution last year to enable states to keep the spending momentum. Capex by states and CPSEs are critical for fast-tracking gross capital formation in the economy, given that private investments continue to be weak. States seem to have tried to do a balancing act by increasing capex as well as trimming down borrowing plans.

Thanks to buoyancy in tax revenues, the Centre released Rs 8.83 trillion to states for FY22 as their share of the divisible tax pool, 19% more than the revised estimate (RE) for the year. The Centre also front-loaded the entire back-to-back loan component of Rs 1.59 trillion to the states in FY22 to compensate for their GST revenue shortfall from the protected level.

The combined tax revenues of the 20 states stood at Rs 21 trillion, which was 103% of their aggregate target for FY22. Improved revenue flows have allowed these states to curb borrowings; they borrowed 15% less in in FY22 than in the previous year.

The 20 states saw their revenue expenditure rise 12.5% on year in in FY22, lower than the budgeted rate of 20% growth by all states over actuals of FY21.

Besides states, the Centre also roped in CPSEs for pushing public capex, which is key to an investment-led economic growth revival. Despite facing difficulties in executing projects due to Covid-19, the combined capex by large CPSEs and departmental undertakings – all with annual capex budgets at least Rs 500 crore – was Rs 5.91 trillion in FY22. This was 103% of the Rs 5.75 trillion revised target for the year.