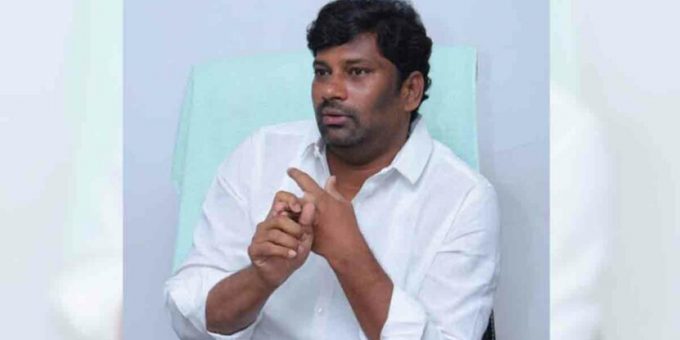 Mancherial: Government Whip Balka Suman has alleged that the leaders of the Bharatiya Janata Party, who could not digest the development of Chennur Assembly constituency by the TRS party, were trying to spread rumours among farmers and baseless allegations against the party. He, in a press statement, condemned the leaders for trying to pick arguments with farmers in agriculture fields, on Saturday.

“While the TRS party is marching ahead by realsing long cherished dream-Chennur Lift Irrigation Scheme (CLIS)—providing water to 90,000 acres of this region spending Rs 1,658 crore, the leaders of the BJP are trying to confuse farmers by spreading falsehood,” Suman flayed. He alleged that the goons of the party abused the farmers for questioning their stance on procurement of paddy of Yasangi season.

The government whip ridiculed that the leaders were misleading the public by claiming that they were attacked by activists of the TRS when they were interacting with chilly growers. He advised them to stop their cheap tricks and to learn from their mistakes. He added that they were jealous of the development being witnessed in Chennur Assembly constituency.

In the meantime, the leaders of the TRS cautioned that they would not tolerate if the BJP tries to disturb the peace of the Chennur segment by portraying it in a bad light. They requested the public to be cautious of the acts of the saffron brigade and urged them not to trust their statements. They addressed pressmen in Chennur and condemned the assaults of the activists of the party against chilly farmers.
Chennur Mandal Parishad President Mantri Bapu, ZPTC Member Mothe Thirupati, Chennur Primary Agriculture Cooperative Society chairman Ram Reddy, Farmer Coordination Committee chairman Sammi Reddy and many others were present.