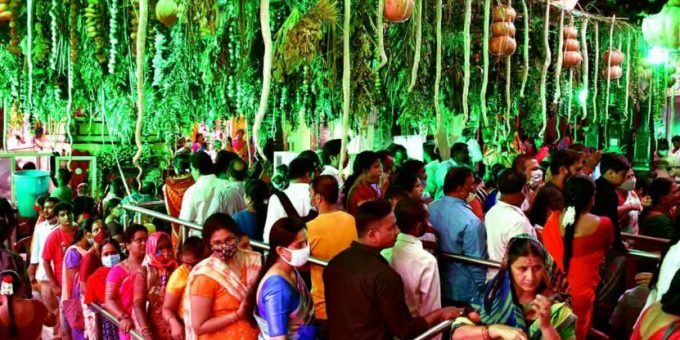 Hyderabad: For the smooth conduct of Bonalu festivities, a series of works near temples including laying of roads, sanitation, drinking water arrangements, illumination, health camps, installing surveillance cameras, etc are underway in the city with Rs 100 crore.

To further scale up safety near temples, police personnel and SHE Teams will be deployed. In addition to the Rs 100 crore sanctioned for various developmental works near temples, the state government sanctioned an additional Rs 15 crores which will be distributed to members of various temple committees.

Animal Husbandry Minister, T. Srinivas Yadav on Friday said the Chief Minister K.Chandrashekhar Rao is the only leader in the country who is sanctioning funds for temples maintained by non-government temple committees.“Earlier, many temple committees used to depend on donations ahead of Bonalu for taking up paintings, renovation, illumination etc, However with the State government sanctioning funds, elaborate arrangements are being made without any difficulty,” he said.