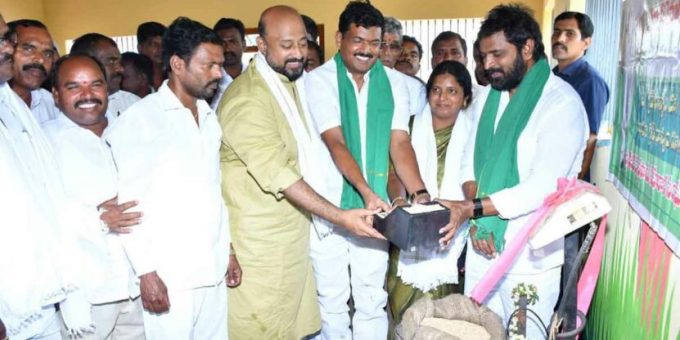 Mahabubnagar: Tourism Minister V Srinivas Goud said the Telangana Government would procure every grain produced by farmers in the Yasangi season in the State.

The Minister launched a paddy procurement centre at Yedira here on Tuesday. Addressing on the occasion, the Minister said Mahabubnagar was once known for drought and farmers used to migrate to different areas in search of livelihood.

After TRS Government came to power, things have changed across the State and in Mahabubnagar particularly. Farmers even in remote villages of Mahabubnagar were demanding the Government to set up procurement centres and this stands a testimony for agricultural growth in the district, he said.

Palamuru – Rangareddy lift irrigation project was yet to be completed and one could imagine the extent of acreage that would increase in the district once the project was completed, the Minister said.

Even as the Central Government washed its hands off paddy procurement, considering the plight of farmers, Telangana Government was procuring paddy produced during the Yasangi season, he added.

Earlier in the day, the Minister formally launched the “Love Mana Mahabubnagar” selfie point at Mettugadda crossroads in the town.

The State Government was extending all support for development of infrastructure in Mahabubnagar. In the past, drinking water was supplied once in 14 days but all that was history as TRS Government addressed the drinking water issues, the Minister said.

Apart from development of Mini Tank Bund, Shilparamam, Necklace road, vegetables and meat market, hospitals, emphasis was being laid on executing beautification works in the town, he added.