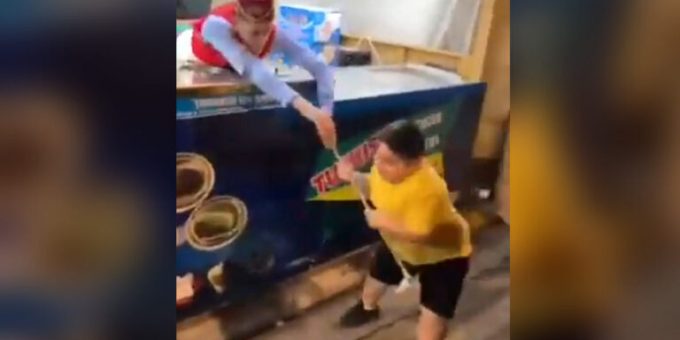 Hyderabad: We all know how irritating it is when someone plays around with our food. A hungry human can turn into an angry human in no time.

Banking on that same feeling, Turkish ice creams have become quite famous in recent years. Vendors often tease the customer by serving the ice cream cone on a long stick. They will give the cone and then take it away by rotating the stick before finally giving it to the customer. Though the whole process seems vexing, the growing impatience and finally getting to eat your ice cream has been turned into a fun game that earned Turkish ice creams its popularity.

In a video that is doing rounds on social media, one kid decided to give it back to these vendors. The clip shows a young boy who is wearing a yellow tee and black shorts standing before the Turkish ice cream vendor.

Doing his usual thing, the vendor fixes the cone to the corner of the stick and moves it towards the boy intending to rotate it. But the boy, who looked determined to take his ice cream, holds the stick, snatches it, and simply walks away licking the ice cream.

This hilarious video has over 2.5 million views with users applauding the kid who ‘took revenge’ on the Turkish ice cream vendors. Some users also shared videos of other kids being smart with these vendors.

“He is my hero, what a relief after seeing these annoying videos for years,” wrote one user. Given how accurately the kid snatched the ice cream, another user commented that the kid has been training his whole life for that exact moment.