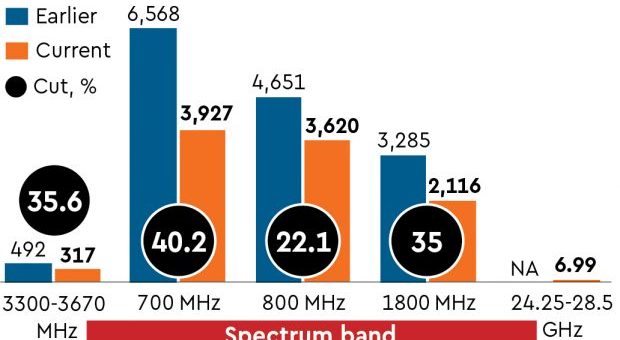 Since operators would need around 100 MHz to run an efficient pan-India network, the new reserve price means they would have to shell out Rs 31,700 crore for buying this band.

Trai also submitted the reserve price for the 24.25-28.5 GHz spectrum band — also a 5G band and is referred to as a millimetre band — for the first time and fixed it at Rs 6.99 crore per MHz. Operators would need a minimum of 800 MHz for a pan-India network and will have to fork out Rs 5,592 crore. So, in total, they would have to spend around Rs 37,292 crore for the two bands.

If spectrum across all bands gets sold at the recommended reserve price, telecom operators will have to shell out Rs 5.07 trillion.

These prices have been given if the life of the spectrum is 20 years as has been the practice in the earlier auctions. Trai has said that if the operators want the spectrum for a 30-year period, the reserve price would be 1.5 times of the 20-year period, meaning the telecom operators would have to pay Rs 55,938 crore for the two 5G bands.

If the price seems high, Trai has tried to soften the blow by recommending that operators should be allowed easy payment options, including part payment with a flexibility of moratorium, but the net present value will remain intact.

The regulator also cut the price of the prized 700 MHz band by 40% to `3,927 crore, but whether there will be takers for it this time remains to be seen. This band has been put for auction twice in the past – 2016 and 2021 – and the entire lot remained unsold because the industry found the price too high.

On the issue of spectrum caps, Trai has reduced it to 40% for sub-GHz bands against 50% earlier, while the overall cap across bands has been done away with compared to 35% earlier.

A landmark recommendation has been that non-telecom enterprises would be allocated 5G spectrum for building their private networks for data needs. However, the Trai has added that such enterprises can take spectrum on lease from telecom operators also. They can also have their networks build by the telcos. The telecom operators had opposed the concept of private networks fearing revenue loss but the Trai has struck a middle path on this front.

The Trai recommendations now need to be examined by the government, which has the power to make changes in the final price and other terms and conditions. As per the process, if the government contemplates any change, it sends the matter back to the regulator for reconsideration. If the Trai agrees to the changes, it’s fine, otherwise the government carries on with its changes.

Similarly, in the 2016 auctions, the government had mopped up Rs 65,789 crore, 4% over the reserve price. This was also seen as a lukewarm response as only 965 MHz spectrum got sold against a total of 2,353 MHz put up for sale, meaning that only 40% got sold.