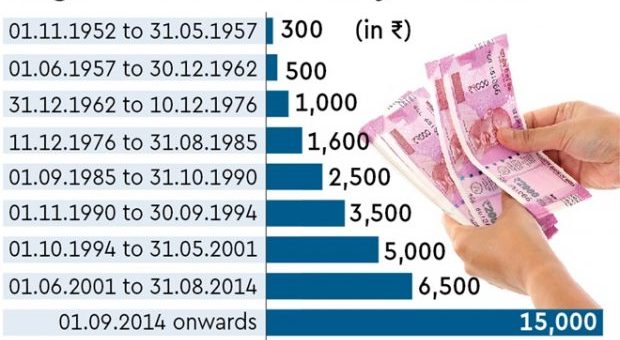 To widen the Employees’ Provident Fund (EPF) coverage, the labour ministry is likely to raise the wage ceiling for mandatory EPF benefit to Rs 21,000 a month from Rs 15,000 now.

An announcement to this effect is expected soon.

The move is likely to bring in an estimated 10 million more workers under the social security net.

Currently, EPFO has around 65 million contributing members. The wage ceiling was last raised in 2014, for the ninth time since the Employees’ Provident Funds Act was enacted in 1952. Though the mandatory cover is for employees earning up to Rs 15,000 a month, sections of the employers voluntarily extend the benefit to people with higher salaries as well.

The wage ceiling under the other social security scheme, Employees’ State Insurance Corporation (ESIC), currently stands at Rs 21,000 a month, raised with effect from January 2017 from Rs 15,000 earlier.

While ESIC is applicable to all non-seasonal factories, shops, hotels, restaurants and a host of other areas of work having 10 or more employees; EPF is applicable in factories and establishments which employ 20 or more workers. Others can also join the scheme voluntarily.

Trade unions, including RSS-affiliated Bharatiya Mazdoor Sangh (BMS), have been demanding the raising the wage ceiling under EPFO to align it with the ESIC for long. Binay Kumar Sinha, general secretary, BMS, said that the EPF Act should also be made applicable to all establishments having 10 or more people. The threshold should also be linked with inflation.

A person covered under EPF gets benefits under three schemes — provident fund, pension and insurance — run by the EPFO. In the defined contribution-based scheme, employees contribute 12% of their wages while their employers contribute 13% of the employees’ wage into the scheme. Of employers’ 13% contribution, 3.67% goes into the EPF account, 8.33% in EPS and 0.5% each in EDLI scheme and in the administrative account.