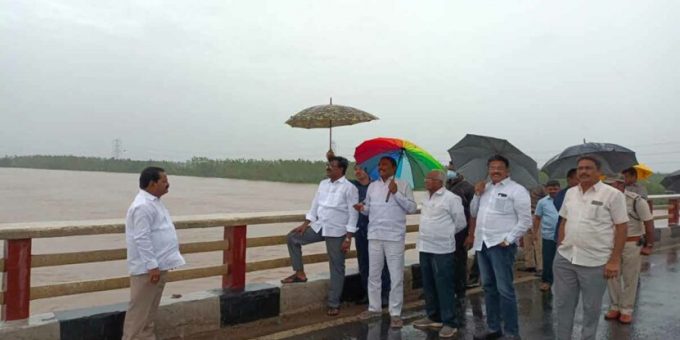 Kothagudem: The water level in river Godavari at Bhadrachalam in the district has been receding and came down to 52.9 feet at 8.35 am on Tuesday with the decrease in flood inflow from upstream projects.

Transport Minister Puvvada Ajay Kumar, who stayed overnight at Bhadrachalam to monitor the flood situation following directions from Chief Minister K Chandrashekhar Rao, visited the river karakatta and the bridge across it during the morning hours to take stock of the situation.

Though the water level in the river has been receding the government machinery in the district was still on high alert as the water level was still above the second warning level. All facilities have been made for people who were shifted to rehabilitation centres, he said.

Ajay Kumar directed the District Collector Anudeep Durishetty to take proper care of the evacuated people at rehabilitation centres by providing them food, drinking water and medical facilities. Proper sanitation has to be maintained at the relief centres.

Similarly a close watch on irrigation tanks and overflowing streams has to be maintained, he suggested. Later the minister visited the rehabilitation centres and distributed fruits to them. Interacting with the evacuated people he assured them that the State government would look after them.