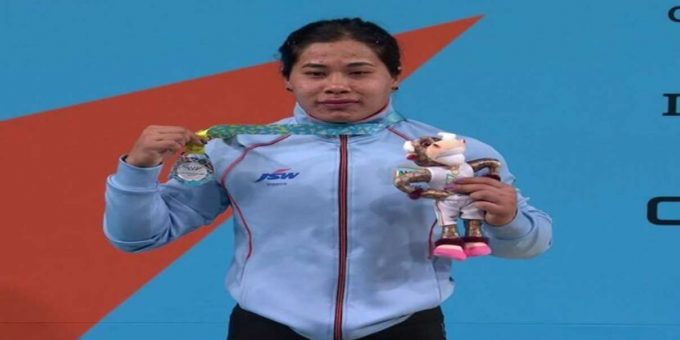 Birmingham: Bindyarani Devi won India a fourth medal on a successful day at the Commonwealth Games weightlifting arena in Birmingham, bagging a silver medal in the Women’s 55 kg weight class.

The 22-year-old from Manipur lifted a total weight of 202 kg with a superb attempt of 116 kg in her final turn in clean and jerk to leapfrog England’s Fraer Morrow (198) and finished just 1kg adrift of Nigeria’s Adijat Adenike Dlarindye, who ended with a total of 203 kg, a Games record.

Bindyarani, who managed a best effort of 86 kg in the snatch category, placing behind the Nigerian 92 kg and the English girl 88 kg, came back strongly in clean and jerk, which is her stronger side as she made up for the gap with two superb lifts.

She started the clean and jerk with 110 kg in the first attempt while the Nigerian girl failed to lift the same weight. Adijat lifted 110 kg in her second attempt and then added one more kg to her total, while Bindyarani Devi failed to clear 114 kg. That pushed the Indian weightlifter from Imphal to third position as England’s Morrow 109 kg to move up to a total of 198 kg.

In a desperate attempt in her third and final chance, Bindyarani lifted 116 kg in her final clean and jerk effort, to break the Games record and move to 202 kg and claim the silver medal.

This was Bindyarani’s first medal in the Commonwealth Games.