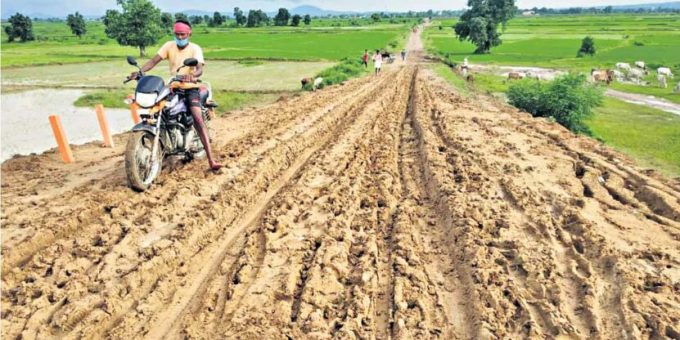 Kumram Bheem Asifabad: The districts of Nirmal, Adilabad and Mancherial present a dichotomous picture as far as the laying of roads is concerned. The pace of works in respect of National Highways in these districts is quite fast, as environmental clearances are given without much ado; the same alacrity is not shown in giving clearances in respect of laying of roads or construction of bridges in interior forest areas.

In several instances, laying of blacktop roads, construction of high-level bridges and widening of existing roads in several interior parts of the backward districts continue to be hit by the inordinate delay in giving approvals by the Forest Department, thereby severely inconveniencing the people living in remote areas. 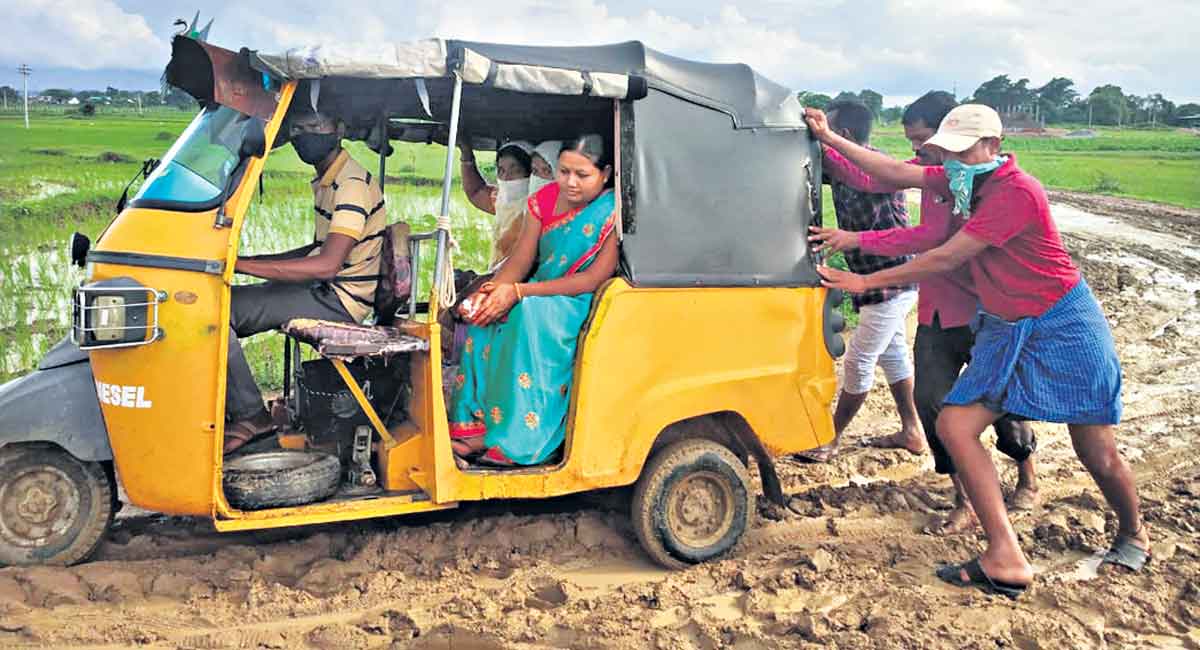 Passengers push an auto-rickshaw stuck in muddy road. Villagers are forced to trek for long distances to reach mandal centres.

For instance, works on 15 roads and two high-level bridges in different areas of the districts are yet to take off due to delay clearances by the Forest Department. The works of a road from interior Dimda to Chittam villages in Chintalamanepalli mandal and Kammargaon to Nandigaon villages in Penchikalpet mandal and Movad to Chorpalli villages in Asifabad mandal have not commenced for want of approvals from the Forest Department.

Similarly, works on two high-level bridges between Dimda and Chittam villages are kept pending for quite a long time due to delays in sanctioning approval. Similarly, works on a road from Pangidi to Madhura Thanda in Tiryani mandal, between Kamana and Sarkepalli villages and other parts of the district are facing a roadblock.

In the meantime, 12 works of roads and high-level bridges, to be taken up by the Panchayat Raj Department, are kept in cold storage in various places in Sirpur (T) Assembly constituency. Seven works of roads in Asifabad segment including upgrading of an existing road have not begun so far following the delay in obtaining clearances, officials say.

When contacted, District Forest Officer S Shantaram said that the proposals for the compensatory measures were submitted to the government three months ago. The works would be approved soon. Underpasses and other mitigating steps were proposed as guidelines of the National Tiger Conservation Authority (NTCA) and by taking conservation of wildlife animals into consideration, he said.

Incidentally, a major portion of the works is meant for the villages in inaccessible forest areas, which also see the movement of Maoists. The habitations and hamlets are deprived of a basic amenity—road connectivity—for decades. Dwellers are forced to trek for long distances to reach their mandal centres and nearby towns for various needs including medical emergencies.

Monsoon aggravates hardships
Monsoon, in particular, aggravates the woes of the residents of remote parts of the district. People living in interior areas witness nightmarish experiences to traveling to surrounding villages. They swim flooding streams to reach mandal centres and towns, risking their lives. They remain disconnected from the mainstream during monsoon with low-level bridges getting submerged due to heavy rains.