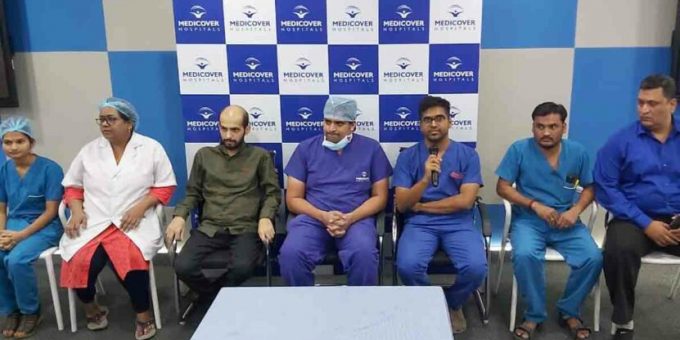 Hyderabad: A 35-year-old man from Yemen, who had received multiple bullet injuries and had developed major complications after undergoing surgery in his country, was successfully treated by specialists at Medicover Hospitals, Madhapur, a press release said.

The gunshot wound had pierced the man’s chest and perforated the stomach, leading to intense blood loss and large gastric defects. He underwent a series of life-saving surgeries in Yemen but later developed complications when the wound burst open again, causing bleeding and debridement of the left diaphragm region and left side chest region.

The patient underwent esophagogastric stenting on April 26 and doctors placed another stent on May 3. Subsequently, the chest wound and leak from the abdominal wound stopped and the patient was discharged on May 7. Senior gastroenterologist, Dr Moka Praneeth treated the patient with stenting to stop the gastric leak and senior radiologist, Dr. Vijay Kumar and general surgeon, Dr. A. Sarath helped with the patient’s management.